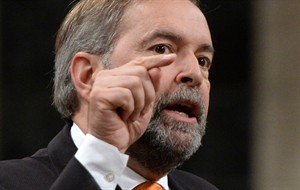 NDP leader Thomas Mulcair speaks in the House of Commons in Ottawa on Tuesday, November 4, 2014. THE CANADIAN PRESS/Sean Kilpatrick

Mulcair confirmed Thursday that it was complaints from two NDP MPs that prompted Trudeau to suspend Scott Andrews and Massimo Pacetti from the Liberal caucus pending an investigation.

Speaking in Whitby, Ont., Mulcair said he knew about the complaints but had not pursued them because the women wanted to keep the matter confidential.

"Our No. 1 concern was to make sure that they got the help they needed and that their wishes were respected," he said.

"Those wishes included a very strong desire to keep this confidential. That was their request and we were not about to override that and make them victims a second time."

Mulcair added: "Anyone who went against that, of course, would be running the risk of making them become victims a second time. That's certainly not something we would ever be part of."

He also chided Trudeau for failing to give New Democrats a heads up before going public.

"There was no prior warning whatsoever from the Liberals that they were going to be bringing this forward yesterday," Mulcair said.

However, Trudeau continued to argue that he had "a duty to act" when an MP directly complained to him about the behaviour of one his caucus members.

The Liberal leader announced Wednesday that he was suspending Pacetti and Andrews over allegations of "serious personal misconduct" levelled by two MPs from another party.

"I was, as you know, very, very diligent to not reveal the gender, the identity or even the party affiliation of the individuals making the complaints but, as a leader, I have a duty to act," Trudeau said during a byelection campaign stop in Hinton, Alta.

Asked if he could have somehow disciplined his MPs without saying why, Trudeau said his explanation that there had been allegations of personal misconduct was "both general and specific enough to be fair."

As for New Democrats' accusation that he didn't respect the wishes of the women to keep the matter confidential, Trudeau said: "I just know that for someone to come forward directly to a party leader who is not their own means that there is an expectation that there will be consequences."

Mulcair had a different take on his duty as a leader.

"We have a right to a safe workplace and that includes Parliament. Women should not have to worry about these things and, if they do have the courage to talk to those around them, we have an obligation to respect their wishes as stated," he said.

Green party Leader Elizabeth May said Trudeau would have been "damned if he did and damned if he didn't" take action on the complaints. And she called on the NDP to stop politicizing the issue.

"In all this, the worst thing that could happen would be an injection of toxic partisanship and I'd ask Mr. Mulcair to rethink the approach he's taking," May said.

The matter has been referred to the secretive multi-party board of internal economy. The Liberals are asking that an independent third party be brought in to investigate the complaints.

Both Pacetti and Andrews deny any wrongdoing and say they expect to be exonerated.

Trudeau took action after one of the complainants personally complained to him on Oct. 28 about the Liberal MPs' conduct. He instructed Liberal whip Judy Foote to discuss the matter with her NDP counterpart, Nycole Turmel.

The exact nature of the complaints against the pair of Liberal MPs is not clear.

Turmel told CBC Radio that the women didn't lodge formal complaints because they didn't want to hurt the careers of the two Liberal MPs.

"He can do with his MPs what he needs to do. That's his business, those are his MPs," Leslie said. "He doesn't have the right to do that to the women in our caucus."

The fact that Trudeau did not name the complainants is irrelevant, Leslie argued.

"We all know each other's names. This is a small work environment."