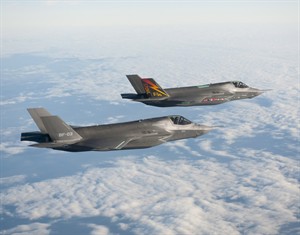 OTTAWA - A leaked Pentagon briefing says Canada has signalled to Washington that it wants to buy at least four F-35 stealth fighters, but a spokesman for Public Works Minister Diane Finley insisted Friday that no decision has been made.

The slide presentation, delivered to the secretary of the U.S. Air Force on Oct. 27, 2014, shows Canada has asked to swap places with the Americans and place the order in the current fiscal year, which means a possible delivery date of either 2016 or 2017.

The briefing indicates the Americans would make it up by taking four of the aircraft Canada had already planned to buy in 2019.

The U.S. said it would agree to the switch as long as the much-delayed development of the controversial fighters remains on track and that no other ally asked for a similar arrangement.

"Canada needs to deliver Letter of Intent with updated bed down plan to F-35 (project engineering office) — (estimated completion date) mid-November," said the briefing, a copy of which was obtained by The Canadian Press.

The presentation by U.S. Lt.-Gen. Chris Bogdan — head of the F-35 program at the Pentagon — also said the U.S. project office has begun the process of notifying Congress.

The Conservative government put its fighter jet plan on hold almost two years ago — they called it hitting the "reset button" — after the auditor general and the parliamentary budget officer criticized the departments of National Defence and Public Works. The watchdogs said the cost of the program had been understated and inadequately researched.

Then-defence minister Peter MacKay said in 2010 that the government planned to buy the radar-evading jet, but a series of production delays and uncertainty over the price tag made the program a political lightning rod.

When it first proposed the project, the government intended to buy 65 jets. The briefing gives no hint at a timetable for potential follow-on purchases.

Marcel Poulin, a spokesman for Finley, insisted Friday that "no decision has been made on the replacement of Canada's CF-18 fleet."

He went on to note that the government has committed to extending the life of the current fighters to keep them flying until 2025.

Poulin, however, refused to address the specific issue of how to reconcile that long-standing position with the contents of the briefing.

A senior government official, speaking on background, also stated that no decision had been made and noted Prime Minister Stephen Harper is out of the country and will be travelling a lot this month.

The source, who was not authorized to talk to the media, characterized the Pentagon briefing as an option that's being explored.

If so, the U.S. and Canada are clearly not on the same page when it comes to Ottawa's participation.

After question period Friday, NDP defence critic Jack Harris called it "outrageous" that the government appeared to be going ahead with the F-35 in spite of all the controversy.

"This is going on behind the backs of Canadians after the debacle that we've had with the F-35, keeping everybody in the dark about the price, sole-sourcing it after they said they were going to have an open competition," he said.

Since early summer, the federal cabinet has been studying a series of reports on alternatives to the F-35 and the expected industrial benefits. A decision had been expected earlier in the fall.

Alan Williams, a former defence procurement official, said it's hard to imagine the government only buying four aircraft and what the letter of intent will signal — if and when it is sent to the Pentagon— is de facto approval to proceed with the F-35.

"You can spin it any way you like," he said. "Once you've dipped your toe into the water, your foot will follow."

The government originally claimed the cost of buying and maintaining the fighters would be $16 billion over 20 years. Subsequent investigations by both the auditor and the PBO reached much higher totals.

An independent analysis commissioned by the Public Works secretariat overseeing the program said the cost would be around $44 billion once everything from fuel to pilot salaries and disposal was figured in.

In a statement, Liberal defence critic Joyce Murray expressed shock that word of the proposal was coming out of Washington, not Ottawa.

"Why is an American general informing us that Canada is set to order four F-35s in the next few weeks?" Murray asked.

"Pressing the 'reset' button on the CF-18 replacement clearly hasn't taught the Conservatives a single thing about conducting an open and transparent procurement process."