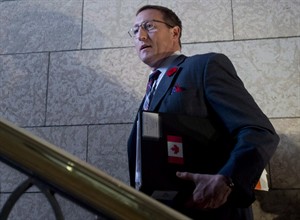 Justice Minister Peter MacKay walks up a flight of stairs outside the House of Commons on October 30, 2014 in Ottawa. THE CANADIAN PRESS/Adrian Wyld

OTTAWA - An NDP MP faces a wrongful dismissal suit filed by a former employee who says she faced a "toxic" and "humiliating" work environment rooted in sexism and was fired after formally complaining about the alleged bullying.

Fabiola Ferro also alleges in her statement of claim, filed Friday in Ontario Superior Court, that the party offered her a new job on the condition that she agree not to sue MP Sylvain Chicoine and the NDP.

The lawsuit comes to light as political parties grapple with the issue of sexual harassment and the treatment of women on Parliament Hill.

On Wednesday, two Liberal MPs were suspended from caucus following allegations of serious personal misconduct by two female NDP MPs. Scott Andrews and Massimo Pacetti say they have done nothing wrong. Neither the nature of their alleged misconduct nor the names of the two women have been released.

NDP Leader Tom Mulcair said Chicoine would not face a reprimand because a management-union committee had already reviewed the matter. Chicoine said he took all the right steps, and believes the matter will be dismissed.

The case involving Chicoine revolves around the office environment and Ferro's accusation that the MP allowed a fellow male employee to bully her. Ferro is suing for more than $150,000 in damages and claiming Ontario Human Rights Code violations.

"(The co-worker) threatened her, violated her freedom of expression, criticized her work in an unfair manner, insulted her professional abilities, ignored her, assigned her overtime (without permission) and increasingly isolated her," said the statement of claim.

"On several occasions, Fabiola tried to discuss the problem of harassment with Chicoine. He refused to take steps to fix the deplorable situation and instead reprimanded her."

"According to provisions of the collective agreement, Ms. Ferro's allegations were immediately subject to a formal investigation, which found them to be baseless," said Chicoine.

"I am confident that the courts will reach the same conclusion."

None of the allegations have been tested in court.

Ferro eventually launched an unsuccessful complaint through a committee linked to the NDP's collective agreement. She says Chicoine initially fired her after she initiated the grievance, but later put her on leave with pay.

The co-worker also launched a complaint accusing Ferro herself of harassment. Both complaints were dismissed last spring by the workplace committee. Ferro says she was fired for good in late October, with Chicoine arguing she had "abandoned her position."

Ferro says the NDP subsequently offered her a data entry job with a 60-day probation period, on the condition she agree not to sue Chicoine and the party.

Mulcair, speaking to reporters in Saskatoon on Friday, emphasized that Ferro's lawsuit was focused on her dealings with the co-worker and not with Chicoine.

"The union and the management have concluded that no action is required under this case," Mulcair said.

"It was a question of mutual accusations by employees, it has nothing to do with an accusation of harassment against a sitting member of Parliament. It's very important to get that right."

Neither Mulcair nor Chicoine addressed the MP's firing of Ferro.

The allegations of improper conduct on Parliament Hill, added to the allegations of sexual violence against ex-CBC host Jian Ghomeshi, have sparked a national conversation about what women face in and out of the workplace.

Ghomeshi faces accusations by nine women, three of whom have filed complaints with police. He has denied any wrongdoing and vowed to fight the allegations "directly."

Justice Minister Peter MacKay said there's the potential for something positive to emerge from the controversies.

"If there was anything positive to have come from these revelations, and there's very little frankly given the seriousness of the allegations, but it would be that I think there's a very mature discussion happening now in the country," MacKay said.

"It has elevated the public consciousness of the importance of stamping out harassment and addressing it head on, bringing it somewhat out of the shadows and making necessary adjustments."

MacKay said those changes could happen in the area of criminal law, justice reform or through changes to practices and protocols in individual workplaces.

The House of Commons will have to consider changes to its practices and protocols following the suspension of Andrews and Pacetti.

The closed-door Commons committee called the Board of Internal Economy is set to discuss the matter later this month. Currently, there is no complaint or resolution mechanism for cases of harassment or misconduct involving MPs.