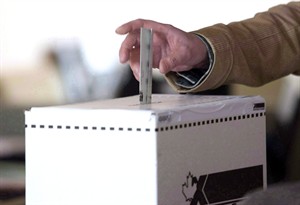 A man casts his vote for the 2011 federal election in Toronto in this May 2, 2011 photo. A closer than expected byelection contest to fill the void left by Jim Flaherty's death has turned nasty down the home stretch, with the Conservatives accusing the Liberals of running a smear campaign. THE CANADIAN PRESS/Chris Young

OTTAWA - A closer than expected byelection contest to fill the void left by Jim Flaherty's death has turned nasty down the home stretch, with the Conservatives accusing the Liberals of running a smear campaign.

The late finance minister took Whitby-Oshawa with a comfortable 58 per cent of the vote in 2011. Yet polls conducted in the final few days of the campaign put the Conservatives and Liberals in a dead heat.

The Conservatives are pulling out all the stops to keep the Ontario riding Tory blue in Monday's vote.

Prime Minister Stephen Harper himself dropped by Whitby last month to announce the doubling of the children's fitness tax credit.

Jenni Byrne, the Conservative's national campaign director, was spotted by Liberals in the riding Sunday.

Despite running a distant third with 14 per cent of the vote in 2011, the Liberals believe they have a chance of staging an upset.

Their own polling and several public opinion surveys suggest Liberal candidate Celina Caesar-Chavannes, an entrepreneur, research consultant and political newcomer, has steadily closed in on Perkins. The most recent poll, conducted Sunday by Mainstreet Technologies, had the Liberals and Tories tied while NDP support had collapsed.

In a sign of how hot the Whitby-Oshawa contest has become over the past few weeks, various media outlets, including The Canadian Press, were alerted to documents that raised questions about some of Perkins' mayoral expenses.

These included trips to real estate conferences in Las Vegas and Cannes, France, the installation of a back door to her office, a $345-a-night hotel room for a conference in Ottawa, as well as her handling of two funds controlled by the mayor.

Perkins did not respond to a request for an interview, but a spokesman said all expenses were above-board, as was her handling of a Whitby performing arts centre fund and a community development fund.

"Our opposition has been spreading (the documents) to every media outlet from here through to Ottawa for a few weeks now in an attempt to smear Ms. Perkins throughout this campaign," Wiebe Bergsma said in an email.

At a minimum, Caesar-Chavannes appears certain to vault past her New Democrat rival, Trish McAuliffe, an autoworker and union activist, who ran second against Flaherty in 2011 with a respectable 22 per cent of the vote.

That would be another feather in the cap for Justin Trudeau, who has led the Liberals to dramatic gains in every byelection held since he took the helm 19 months ago. It would further cement the perception that the Liberals, left for dead in 2011, are now the real alternative to the Harper government, not the official Opposition NDP.

To a lesser degree, the same is likely to be true in another byelection to be held Monday, in the Alberta riding of Yellowhead.

Yellowhead is a Conservative stronghold — won by Rob Merrifield in 2011 with a whopping 77 per cent of the vote — and the Tories are expected to easily hold onto it.

However, the Liberals, who ran fourth with a dismal three per cent of the vote last time, are hoping to gain enough support this time to surpass both the New Democrats and Greens, who scored 13 per cent and five per cent respectively in 2011.

In Whitby-Oshawa, the NDP's McAuliffe says voters want "change" but she concedes "it's a little disheartening" to find she's unlikely to be the beneficiary of that mood.

"It didn't scare me away to run against Jim Flaherty ... the Justin flash and flair in the community, all I can say is, just remember, the next day after election, Justin's not your MP."

It is telling that Trudeau intends to be in Whitby at a Caesar-Chavannes campaign rally as the results pour in Monday night; NDP Leader Tom Mulcair is to be in St. John's, NL., at the nomination meeting for one of his MPs, Ryan Cleary.

Affection for Flaherty still runs deep in Whitby-Oshawa, and although Caesar-Chavannes admits that's a challenge she doesn't think a Conservative win is a foregone conclusion.

"The sense that I'm getting ... is that people want change and people are willing to send a message that they want that change through the (byelection) vote."

On the contrary, said Bergsma, voters in the riding know the country needs "a strong, serious leader to do the job of prime minister" and are "worried that Justin Trudeau is too high risk, that ... he's going to raise taxes and increase the debt, while clawing back our latest tax breaks."

Bergsma said families are "enthused" about the Harper government's recently announced tax breaks, like the boost in the universal child care benefit.

He did not mention the government's plan to allow couples with young children to split their income for tax purposes — a measure that economists say will largely benefit wealthy families and which Flaherty himself criticized shortly before he died last spring.