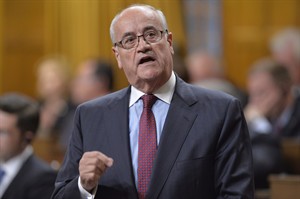 Veterans Affairs Minister Julian Fantino answers a question during Question Period in the House of Commons on Parliament Hill in Ottawa, Thursday Sept.18, 2014 . Fantino says the department's $1.1 billion dollars in unused funding over seven years is "not lost money." THE CANADIAN PRESS/Adrian Wyld

The department was unable to spend more than $1.1 billion of its budget over seven years, and like other departments that are unable to spend their appropriation within the budget year, Veterans Affairs was required to return its unspent funds to the treasury.

But Fantino told a news conference in Halifax that the funding is recycled back into programs for veterans.

"That has taken on a life of its own. It's totally false in the context that it's been portrayed," said Fantino of the lapsed funding at a press conference announcing $200 million over six years to support mental health needs of military members.

"We are not in any way shape or form disadvantaging any veteran who does need help."

Earlier this week, veterans groups were demanding a detailed accounting of which programs had lapsed funding and why. They also accused Ottawa of using it as a deliberate strategy to balance the federal budget.

But Fantino said claims that the unused funds were a strategy to balance the budget are false.

"The funding is allocated and if it's not spent it's recycled back into continuing programs and services for veterans. It's not lost money," said Fantino.

He called it a technical budget process that does not hamper services and programs for veterans.

"If I can put it bluntly, this is a technical kind of to and fro in the budgeting process of government," he said.

"That lapsed funding has absolutely nothing to do, in any way shape or form or influence on the services, programs and support that we are committed and continue to be committed to provide to veterans and their families."

Fantino said his department will be reaching out to the Royal Canadian Legion to provide more detailed information.

The figures are contained in answers to written questions posed in Parliament by the opposition and come as the Conservative government tries to figure out how to implement a series of changes recommended by the House of Commons veterans committee.

—With files from Will Campbell in Toronto