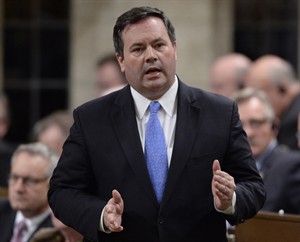 Employment Minister Jason Kenney responds to a question in the House of Commons in Ottawa, Monday, November 24, 2014. THE CANADIAN PRESS/Adrian Wyld

OTTAWA - An attempt by the Conservatives to catch a prominent Liberal candidate with his foot in his mouth has instead wound up biting several Tory MPs, including senior cabinet minister Jason Kenney.

The political sting operation — just the latest in a series of covert Tory efforts aimed at capturing verbal gaffes by Liberals — was launched at a Nov. 13 public meeting in Canmore, Alta., by a young Conservative who's been involved in at least one other similar plot.

She secretly recorded a conversation about the Harper government's plan to introduce income splitting with Banff-Airdrie Liberal candidate Marlo Raynolds and two other men.

The recording was subsequently given to Sun News Network personality Brian Lilley, who used it to bash Raynolds and the Liberals in a newspaper column and on his television show. Raynolds, Lilley reported, had said the Tory tax break would give couples with children money for "arguably nothing" — money they'd spend on TVs, cars and other things that don't benefit the economy.

"It looks like another beer-and-popcorn moment," Lilley wrote in a Nov. 18 column, referring to a controversial comment made during the 2006 election campaign by then prime minister Paul Martin's communications director, Scott Reid.

Reid was pilloried for arguing that parents would spend the Conservatives' proposed $100 per month child care benefit on beer and popcorn, instead of child care.

Lilley's theme was immediately picked up by Conservative MPs in the House of Commons.

Blake Richards, the Conservative MP for Banff-Airdrie, denounced Raynolds for what he called "insulting and condescending" comments.

Two other Alberta MPs, Chris Warkentin and Kenney, the employment minister, also raised the matter in the Commons.

"That is an echo of the Liberals saying that parents would spend money on beer and popcorn," said Kenney, adding that Liberals think they "know how to spend money better than families."

Richards went further, sending out a fundraising email about the comments attributed to Raynolds, arguing that "arrogance like that is frightening" and asking for donations to help "keep Banff-Airdrie blue."

There's only one problem: another participant in the secretly recorded conversation has stepped forward to say it was he, not Raynolds, who actually made the offending remarks.

"I don't believe Marlo should have to take the flak for something I said," Canmore resident Tam McTavish told The Canadian Press.

McTavish, who says he voted Conservative in the last election and has never been a member of the Liberal party, last week wrote a comment on Richards' Facebook page, correcting the record. Richards has not responded to it.

"I have no real motive aside from the fact that I said these things and I don't like someone else taking the blame for my words," McTavish said in an interview Monday.

Neither Richards, Kenney nor Lilley responded Monday to a request for comment.

Lilley has so far refused to issue a retraction, saying in emails to Raynolds that the Conservative supporter who recorded the conversation insists it was the Liberal candidate who made the offending remarks.

"There is also no consensus from our own people after listening to the audio. In fact, most lean towards thinking it is you," Lilley wrote Raynolds on Monday.

Conservative party spokesman Cory Hann intimated that no retraction will be forthcoming from Tory MPs, either.

"The person who recorded the conversation maintains the comments in question are from the Liberal candidate," Hann said in an email. "The audio tape is available online for anyone to hear."

The Canadian Press has listened to the audio. It is clear that at least two different men are involved in the conversation. However, the quality of the recording varies and, at the moment when the words in question are uttered, there is so much background noise that it's difficult to make out the words, much less who is speaking.

Lilley has told Raynolds that the change in audio quality is due to the Conservative operative "zipping up her coat when she thought you were getting nervous that she might be recording you."

Indeed, Raynolds said he was suspicious that the woman was up to something from the outset of the Canmore meeting, in part because he was sure he'd seen her at an earlier meeting in Airdrie — although he says she told him that was her look-alike cousin.

Raynolds asked his wife to take some photographs of the woman during the meeting. They match the profile photo posted on the Facebook page of Alexandra Constantinidis, a former parliamentary assistant to Calgary Conservative MP Rob Anders.

It was Constantinidis who gave Sun News Network an audio recording earlier this fall of another prominent Liberal, retired general and would-be candidate Andrew Leslie. In that recording — similarly used by the Tories to denounce the Liberals in the Commons and to solicit donations — Leslie criticized Israel for "firing indiscriminately" on Palestinian women and children in Gaza.

The woman at the Canmore meeting signed in with the name Tasia Kemp and provided a phone number. When The Canadian Press called that number Monday, a woman who said she was Alexandra hung up when told she was speaking to a reporter.

Last spring, Toronto Liberal MP John McKay was caught in a similar sting operation. A young man, later identified as an intern in Health Minister Rona Ambrose's office, took McKay aside and asked to speak confidentially to him about Liberal Leader Justin Trudeau's decision to veto would-be candidates who don't support a woman's right to have an abortion.

McKay, a well-known pro-life advocate, candidly talked about what he dubbed Trudeau's "bozo eruption." Secretly recorded audio of his remarks was given to CTV News.