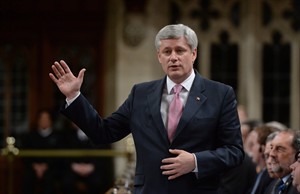 Prime Minister Stephen Harper responds during question period in the House of Commons on Parliament Hill in Ottawa on Nov. 19, 2014. Prime Minister Stephen Harper was briefed earlier this year on how across-the-board budget cuts hurt public service morale, productivity and citizen satisfaction. The memorandum - headlined "Death by a Thousand Cuts: How governments undermine their own productivity" - laid out arguments from an Australian, union-funded study that suggests poorly executed austerity undermines trust and confidence in public institutions. THE CANADIAN PRESS/Sean Kilpatrick

The memorandum — headlined "Death by a Thousand Cuts: How governments undermine their own productivity" — laid out arguments from an Australian, union-funded study that suggests poorly executed austerity undermines trust and confidence in public institutions.

The Conservative government is on track for a budgetary surplus in 2015 after years of belt-tightening.

Billed as "back office" or administrative cuts by Conservatives, the ongoing austerity measures are supposed to shrink departmental budgets without affecting programs or services — a promise the independent parliamentary budget office has been unable to verify even after taking the government to court in a fruitless effort to get a full public accounting.

But the cumulative impact of all the cuts has begun attracting wider notice.

Military veterans are incensed over the closure of Veterans Affairs offices and lapsed funding, First Nations have learned that funding for critically needed infrastructure has been diverted, transportation safety budgets have been slashed, Coast Guard stations have been closed and services across government — from national parks to access to information — are being squeezed.

In a Jan. 27 memorandum to the prime minister, obtained under the Access to Information Act, the Clerk of the Privy Council briefed Stephen Harper on how austerity measures were being assessed in Australia.

"The authors found that prolonged cuts of this nature result in a loss of workforce capability, public sector productivity and innovation, and trust and confidence in public sector institutions," states the memo.

The memo details how public trust is undermined "as programs become less efficient and effective in the wake of across-the-board cuts, and as mistakes and oversights occur."

The study recommends that a better way to trim costs is by using efficiency audits of departments and by engaging staff to find effective and efficient new ways of delivering programs and services.

As the memo summarizes the Australian study, "skills shortages are having a significant impact on government operations, resulting in higher costs for recruitment and training over time, the appointment of more expensive private sector contractors for information technology, and diminished procurement expertise."

Large portions of the four-page memo are blacked out.

The Prime Minister's Office says it receives many memos and would not comment on the views in the Australian study.

"I will say that our government is proud of the steps we have taken to trim the size of government bureaucracy and ensure that tax dollars are being spent on programs and services that benefit Canadians," spokesman Jason MacDonald said in an email.

The full, 29-page Australian report was attached to the memo. It is rather more unsparing than the overview provided by the Privy Council.

"Increasingly, governments are choosing to take an irresponsible, and ultimately self-defeating, approach to budget savings," says the opening paragraph of the report, prepared by the Centre for Policy Development, a self-described progressive think tank.

"Rather than identifying ineffective programs and undertaking the political hard work of persuading the public of the advisability of cancelling the service, many politicians and parties institute across-the-board cuts .... This allows them to claim credit for budget savings without taking responsibility for service cuts."

The study, based on austerity measures taken by national and regional governments in Australia, notes that politicians habitually claim cuts will be efficient and painless.

"In practice, however, claims that administrative budgets can be cut without affecting services are likely to be made only by politicians who have evaded explicit and responsible government decision-making, or want to evade it, or who are prepared to re-define services in order to evade it."