Fear of falsification prevents release of some electronic data: minister 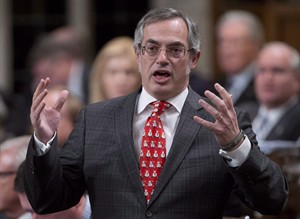 Treasury Board President Tony Clement responds to a question during question period in the House of Commons in Ottawa on December 4, 2014. The Conservative cabinet minister responsible for freedom of information says some federal data cannot be released to the public in electronic format because people might alter it and spread falsehoods. Treasury Board President Tony Clement says there's a fear people could "create havoc" by changing the statistical information. THE CANADIAN PRESS/Adrian Wyld

OTTAWA - The Conservative cabinet minister responsible for freedom of information says some federal data cannot be released to the public in electronic format because people might alter it and spread falsehoods.

Federal agencies hold a vast array of data on everything from immigrants held in detention to use of force by RCMP officers.

Some researchers have requested data kept in electronic format, only to receive it as a paper printout.

That makes it virtually impossible for the recipient to sort and filter the data to identify patterns and trends.

The Access to Information Act says federal agencies must provide timely access to records in the format requested.

Fred Vallance-Jones, who teaches journalism at the University of King's College in Halifax, said Clement's stance effectively violates the rights of requesters.

Vallance-Jones expressed puzzlement at the minister's comments. "There's no legal basis for them as far as I can tell. And there's not even a logical or reasonable basis for them."

Clement has championed growth of the government's online data portal, encouraging federal agencies to disclose data in easily sortable formats on topics including air quality, motor vehicle recalls, and the extent of snow and ice cover.

However, some data sets cannot be released in a spreadsheet or similar electronic format, Clement said in a recent interview.

"What you don't want is to create a file that can be in some way manipulated and altered, and thereby creating a situation of false information," Clement said.

"That's the balancing act that we have to have, that certain files, you don't want the ability to create havoc by making it changeable online."

There are "virtuous" uses of government data — for example, comparing the information with provincial or municipal figures, Clement said. But "in certain situations" the government must "make sure that the data is not corrupted in some way."

"(There's a fear that people will) manipulate the data and publish it and say, 'This is what the government of Canada is saying' when in fact it's not the case. That's the problem."

Clement could not point to a specific instance in which federal data had been altered.

"I don't think I have a case for you right now."

Vallance-Jones, an associate professor, led a 2014 freedom-of-information audit for Newspapers Canada that yielded inconsistent responses to requests for data from federal agencies. The replies included paper only, PDF image files, and data in electronic format.

Clement's concern about data manipulation is "specious" because, technically speaking, any federal document — not just a database — could be falsified by someone with ill intent, Vallance-Jones said.

"I honestly have a lot of difficulty believing that they're making that argument seriously."

It seems the government simply doesn't want some information made public in electronic form, Vallance-Jones said.

"They know that people can then sort it, and filter it, and run it through queries and find things out that they might not want you to find out. And that's the power of data."