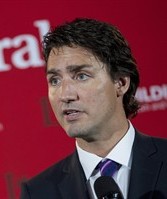 LONDON, Ont. - The non-partisan Bank of Canada has suddenly become an important player in this year's federal election.

The bank's surprise decision Wednesday to cut its trend-setting interest rate gave opposition parties fuel for their argument that Stephen Harper has mismanaged the economy and undercut the prime minister's contention that he's a steady hand on the economic tiller.

"The Bank of Canada is clearly signalling that they believe that the problems in our economy are far deeper than anything the Conservatives have been willing to admit," NDP Leader Tom Mulcair said at a news conference in Toronto.

"It's high time Stephen Harper stopped hiding, stopped hiding his finance minister, stopped playing peekaboo with the budget date and start assuming some leadership and responsibility for the economy."

Wrapping up a two-day caucus retreat in London, Ont., Trudeau accused Harper of having relied on high-priced oil to produce a budget surplus and fund an expensive family tax benefits package in time for the election, scheduled for October.

But now that oil prices have plunged to less than US$50 a barrel, costing the federal treasury billions, Trudeau said Harper is making up economic policy on the fly.

Finance Minister Joe Oliver last week announced he would delay the budget until at least April, given the oil price uncertainty. That fuelled doubts about the government's ability to deliver its promised balanced budget.

However, the sudden souring of the economy is not all good news for opposition parties as they prepare for the election.

It gives them less room to make pricey promises of their own. It also raises politically delicate questions about whether they would be prepared to run a deficit to stimulate the economy, as some economists have suggested.

Trudeau repeatedly dodged Wednesday when asked if he believes it would be wise for the government to abandon its balanced budget commitment until the economy stabilizes.

He said the government's priority should be to spur economic growth and create jobs — not a $2.4-billion tax cut to the country's wealthiest families through its income-splitting scheme.

But would that mean running a deficit?

"I think one of the things Canadians expect of their governments is to be fiscally responsible," Trudeau said.

"It's not particularly fiscally responsible to put all your eggs in the same basket, to pin all your hopes on oil prices remaining high and, when they fall, being forced to make it up as they go along."

The Conservative plan to allow couples with young children to split their income for tax purposes is an example of "a terrible, fiscally irresponsible decision," he added, indicating he would scrap the scheme, rather than run a deficit.

Oliver said Trudeau is promoting a "high-tax, high-debt agenda" that will hurt the economy and kill jobs.

Liberal finance critic Scott Brison said the Conservative pledge to balance the budget in the coming year is driven by politics, not economics.

However, Brison also wouldn't say whether a Liberal government would be prepared to run a deficit.

Mulcair also said the government should scrap the income-splitting scheme and redirect the money to the middle-class.

However, Mulcair has faced questions about how he intends to pay for his promises, including the day-care plan which would cost $5 billion a year when fully implemented.