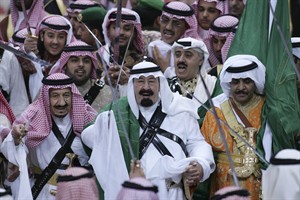 In this Wednesday, Feb. 21, 2007 photo, King Abdullah, center, of Saudi Arabia, surround by Saudi princes, holds his sword as he takes part in the traditional Arda dance, or war dance, during the Janadriyah Festival of Heritage and Culture on the outskirts of Riyadh, Saudi Arabia. On early Friday, Jan. 23, 2015, Saudi state TV reported King Abdullah died at the age of 90. (AP Photo/Hassan Ammar)

OTTAWA - Prime Minister Stephen Harper has offered his condolences to the people of Saudi Arabia on the death of King Abdullah.

The monarch of the oil-rich country who sought to modernize the ultraconservative Muslim kingdom died Friday at the age of 90.

In a statement, Harper said Abdullah was a "strong proponent of peace" in the Middle East.

Harper said the monarch also undertook a range of important economic, social, education, health, and infrastructure initiatives in his country.

Harper said he met King Abdullah in Toronto during a G-20 summit and found him to be "passionate about his country, development and the global economy.

Abdullah was selected as crown prince in 1982 on the day his half-brother Fahd ascended to the throne. He became de facto ruler in 1995 when a stroke incapacitated Fahd and became king in 2005.