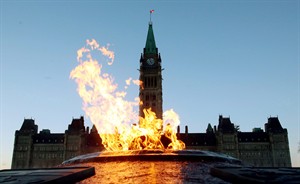 OTTAWA - The RCMP are taking over responsibility for defending Canada's Parliament Buildings, ending a nearly 100-year-old tradition of having independent security officers patrol the House of Commons and the Senate.

The Conservative government is giving the Mounties jurisdiction over the independent security forces currently guarding Canada's halls of power, who report directly and solely to Parliament's own overseers.

Members of that tight-knit Commons team, led by former sergeant-at-arms Kevin Vickers, stopped a gunman's rampage in the Centre Block last October — a show of bravery that was widely hailed by MPs in the House of Commons.

It's that very attack that's prompting the change, the government said Wednesday as it released a motion to be debated later this week that says the time has come for the RCMP to take the lead.

"The RCMP has access to extensive resources that other forces do not, and has acquired extensive experience in security assessments and the information sharing essential to meeting today's evolving threats," said a background document circulated with the motion.

Gunman Michael Zehaf Bibeau made it past RCMP officers stationed on Parliament Hill on the morning of Oct. 22; the force has long had control over the parliamentary grounds, but no jurisdiction inside the buildings.

Ongoing reviews of security on the Hill following the attack indicated a need for more unification among security personnel — something that's been recommended multiple times over the years, including by the auditor general in a 2012 report.

The first step was to eliminate the two separate forces inside the building — one on the Senate side and one on the House of Commons. That happened in November.

The RCMP was also given responsibility for the prime minister's personal security whenever he was in the building — a move that frustrated current House of Commons guards, who were trained for that job by the RCMP themselves.

Placing the RCMP in charge won't mean existing guards will be fired, nor does it mean parliamentarians have lost faith in their abilities, government whip John Duncan said in a statement.

But the union representing some 200 members of the House of Commons security team called the change problematic, both on principle and in practice.

The move "would threaten not only the perception that Parliament makes its laws without interference, but would also have such an effect in practice," the Security Services Employees Association said in a statement.

"Such a possibility would be, in the view of the association, an indefensible and dangerous interference of government into the independence of the legislative function, as well as a solid breach into one of the foundational pillars of our democratic system: the principle of separation of powers."

The existence of an independent police force inside Parliament Hill dates back to the formation of the RCMP itself in 1920.

At the time, parliamentarians didn't want members of that force patrolling the Commons so a distinct security services team was created instead. A second one was established for the Senate in case politicians found themselves in conflict with each other.

The distinction between interior and exterior police agencies on the Hill had become so entrenched that for decades, RCMP or local police had to be formally invited to enter what's known as the parliamentary precinct.