Quebec referendum to be decided in 2018: PKP 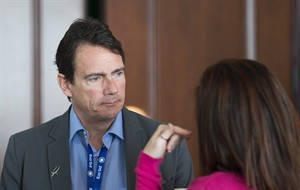 LAVAL, Que. - Pierre Karl Peladeau has announced he will wait until the next Quebec provincial election in 2018 to decide whether a Parti Quebecois government will hold a referendum on sovereignty in its first term.

The Quebec media mogul turned politician said Saturday his priority is to promote Quebec sovereignty between now and 2018 if elected head of the Parti Quebecois.

Speaking during a two-day PQ national council meeting in Laval, Que., Peladeau said the party's opponents are reducing the independence project to the accession process and the right moment for a referendum.

"I think that when we present ourselves in 2018, we will have a very good idea of the approach," Peladeau said.

Bernard Drainville, a member of the Quebec legislature who is also seeking to head up the party, urged Peladeau to use the leadership race to detail his intentions.

Drainville, who also says he will wait until 2018 to decide on holding a referendum during the first term, said the ambiguity surrounding the question of sovereignty led to the PQ's last electoral loss.

Former PQ head Pauline Marois stepped down after the party was defeated at the polls last year.

Considered the front-runner in the ongoing leadership race, Peladeau is the controlling shareholder of Quebecor Inc., one of the main players in the province's media market.

Two other candidates for the party leadership urged Peladeau on Saturday to make a decision on his work with Quebecor to avoid a conflict of interest.

"He will have decisions to make to ensure he doesn't put himself in a situation of a conflict of interest," said former Quebec cabinet minister and fellow leadership candidate, Martine Ouellet.

Pierre Cere, another contender to head up the PQ, accused Peladeau of attempting to buy the party and compared him to "Citizen Kane," the U.S. film that depicts a media mogul's quest for power.

Peladeau rejected the accusation, saying: "The PQ has never been for sale."

Five aspiring PQ leaders spoke to about 450 party delegates during the PQ council meeting over the weekend.