Baloney Meter: Is Canada stature in the world growing, as John Baird says? 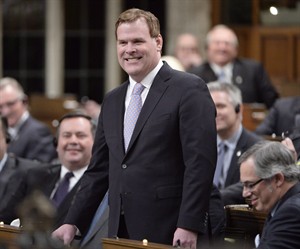 John Baird speaks in the House of Commons in Ottawa on Tuesday, Feb. 3, 2015. Baird surprised many with his sudden resignation last week from federal politics, which also called an abrupt halt to nearly four years as Canada's top diplomat. THE CANADIAN PRESS/Adrian Wyld

OTTAWA - "I have seen the stature of our country grow, in the eyes of the world ... Today, Canada stands tall in the world." — Foreign Affairs Minister John Baird in his resignation speech in the House of Commons, Feb. 3.

As he was saying his goodbyes in the House of Commons, Baird called the country more respected internationally, citing Canada's fight against terrorism, standing "side by side" with Israel, having "strong partners" in the Arab world and opposing the "militaristic expansionism" of Russia's Vladimir Putin in Ukraine — all while promoting trade, especially in Asia.

But the sight of Baird's motorcade being pelted with eggs and shoes last month in the West Bank capital of Ramallah reminded many of the government's controversial pro-Israeli policy, which has sparked heated criticism.

And what about Canada's historic loss of a temporary seat on the United Nations Security Council in 2010 — a first in six decades — to tiny, economically battered Portugal?

Does Canada actually have more stature than it did before 2011, when Baird arrived at Foreign Affairs? Or since 2006, when the Conservatives came to power?

Spoiler alert: The Canadian Press Baloney Meter is a dispassionate examination of political statements culminating in a ranking of accuracy on a scale of "no baloney'' to "full of baloney'' (complete methodology below).

Baird's claim that Canada's international stature has grown contains "some baloney." Here's why:

Canada has long scored well in an annual poll of global attitudes by the British Broadcasting Corporation. In 2014, the BBC World Service and GlobeScan/Pipa poll asked 24,500 international respondents whether they viewed 17 specific countries positively or negatively. Canada came second, behind Germany. Iran was last.

The United Nations Human Development Index is another indicator that many rely on to measure one country's standing with another. The HDI combines data on health, education and gross national income to come up with a ranking among more than 190 countries that the UN says "can stimulate debate about government policy priorities."

International spending also provides a barometer of global standing. Canada's defence spending is down to about one per cent of gross domestic product from 1.3 per cent in 2009, while foreign aid has gone from 0.34 of GDP in 2010-11 to 0.27 per cent in 2013-14, says the Paris-based Organization for Economic Co-operation and Development, which measures growth and progress among 34 leading countries.

WHAT THE EXPERTS SAY

Heinbecker cited a "truculent" attitude towards the UN, on which the Harper government has repeatedly turned its back. Canada is the only NATO country not to sign the UN's Arms Trade Treaty and the only country in world to withdraw from its Convention to Combat Desertification.

On the other hand, Fen Hampson, head of CIGI's global security program, cited the BBC's annual country survey as a good indicator of global attitudes towards any country, including Canada.

"You can pick any elite diplomat you want to make a case for or against the government," said Hampson.

But the BBC poll is a strong indicator that Canada's "brand" has not suffered under the Conservatives, Robertson said, contradicting anecdotal feelings of slippage that might be harboured by some.

Canada has fallen on a number of fronts, said David Biette, director of the Canada Institute at the Woodrow Wilson International Center for Scholars in Washington.

Biette cited the fact that it has not emerged as the "energy superpower" Stephen Harper predicted in 2006, its "blind support" of Israel and its "botched" attempt to secure a coveted seat on the UN Security Council in 2010.

That said, Canada's international reputation might be intact simply because a lot people don't pay attention to the country from abroad, he added.

Taking all of that into account, Baird's claim that Canada's international stature has grown and that the country stands tall in the world contains "some baloney."