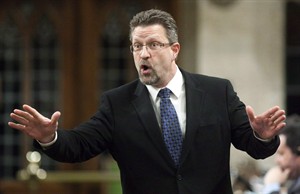 Chuck Strahl gestures as he speaks during Question Period on Parliament Hill in Ottawa on Thursday, February 3, 2011. The Conservative government says it is working on more comprehensive monitoring of Canadian intelligence agencies ??? over four years after committing to do so. THE CANADIAN PRESS/Pawel Dwulit

OTTAWA - The Conservative government says it is working on more comprehensive monitoring of Canadian intelligence agencies — over four years after committing to do so.

In December 2010, the government promised to allow the review of national security activities involving multiple departments and agencies. The goal was to eliminate barriers that prevent spy watchdogs from talking to each other.

It also pledged to create an internal mechanism to ensure accountability and compliance with the laws and policies governing national security information-sharing.

The commitments were included in the Harper government's response to a federal commission of inquiry into the 1985 Air India bombing that killed 329 people, most of them Canadians.

Josee Sirois, a Public Safety Department spokeswoman, says the government is still developing options for inter-agency security review, adding she has no details on when it might be done.

"The government of Canada recognizes the importance of independent review in maintaining Canadians' trust in our national security activities," Sirois said.

"I don't have any more specific details in terms of a timeline."

For instance, the bill would enable a federal passport official to share information with the Canadian Security Intelligence Service about a terror suspect.

While there are efforts to improve information exchanges between intelligence agencies, calls to break down walls between the watchdogs that keep an eye on those agencies have largely gone unheeded.

Pleas for new rules that would permit greater co-operation between watchdogs have come from Chuck Strahl, former head of the Security Intelligence Review Committee, which monitors CSIS, and Robert Decary, who once led the oversight agency for the Communications Security Establishment, the electronic spy service.

Two years ago, Strahl pointed to the review committee's report on Abousfian Abdelrazik, a Montreal man who was imprisoned in Sudan.

The review committee was able to conclude that CSIS reported inaccurate and exaggerated information to partner agencies about Abdelrazik's case. However, it was unable to fully explore the role played by the RCMP, Foreign Affairs, the Canada Border Services Agency and Transport Canada.

"We don't have the authority under the current system to chase those threads," Strahl said at the time. "All we can do is investigate CSIS."

He also advocated a co-ordinating committee that would include various security watchdog chairs to ensure seamless handling of complaints investigations.

In addition, he called for independent monitoring of the Canada Border Services Agency and the security activities of Citizenship and Immigration, Transport Canada, Foreign Affairs, and FinTRAC, the national anti money-laundering body.

In an analysis of the anti-terrorism bill published this week, law professors Craig Forcese and Kent Roach noted the legislation includes a little-noticed amendment that would allow border services agency officials to seize terrorist propaganda.

Forcese and Roach express concern about border officials having such discretion, given past difficulties in determining what constitutes hate propaganda or obscene material.

The lack of an independent review agency for the border services agency — despite O'Connor's recommendation more than eight years ago — increases those fears, the authors wrote.