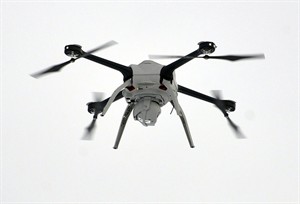 The Aeryon SkyRanger flies through the air with a high-resolution video camera onboard during a demonstration of the Michigan State Police's new Unmanned Aircraft System (UAS), Jan. 15, 2015 at the State Police training track in Dimondale, Mich. One of Canada's newest jails is researching the use of detectors to prevent the invasion of drug-bearing drones that have plagued some North American prisons. THE CANADIAN PRESS/AP/Detroit News, Dale G. Young

HALIFAX - One of Canada's newest jails is researching the use of detectors to prevent the invasion of drug-bearing drones that have plagued some North American prisons.

"We're looking at both obtaining our own drones for ... perimeter checks and verifying surveillance in and around our correctional facility and, in addition to that, detecting drones which are not government operated and that may pose a threat to the facility," he said in an interview.

Incidents recorded in South Carolina and Quebec in the past two years prompted Carroll's interest as he worked on plans for the 100-cell jail, which opened Feb. 8.

"We want to take advantage of the modern technology out there. Drones are part of everyday life now. ... they're going to be impacting security," he said.

He added that readily available, higher-end drones are capable of video reconnaissance — another threat that has to be considered.

Boris Defreville, chief of operations for French-based Orelia Inc., said his firm is one of a few competing in the new drone detection market.

Sensors made by the company, which cost about $3,000 each, lock onto the sound of whirring drone blades, while competitors' devices lock in on Wi-Fi frequencies, use radar or employ infrared cameras, he said.

"Right now everybody is trying to understand what is the best solution to detect drones," he said.

Andrew Preeper of Nova Scotia's Justice Department said there hasn't been a recorded incident of a drone entering prison airspace in the province.

Meanwhile, drone detectors are just part of an array of technology aimed at keeping drugs out of jails, said Carroll, who has asked for approval to buy a body scanner worth more than $200,000 to keep contraband out of the jail in Priestville.

Body scanners are widely used in U.S. jails to detect everything from knives to pill boxes hidden in body cavities or other body parts.

"Most incidents in facilities across Canada can be linked back to the introduction ... of contraband," he said.