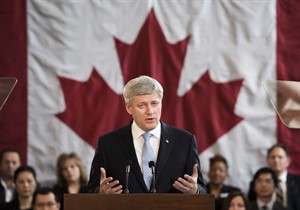 Prime Minister Stephen Harper speaks during a press conference in Toronto on Wednesday, March 4, 2015. Harper announced plans to introduce legislation that would keep what it calls "Canada's most heinous criminals" behind bars for life with no chance of parole. THE CANADIAN PRESS/Darren Calabrese

TORONTO - The Tory government's latest tough-on-crime initiative to make life sentence a sentence for life without parole appears to be aimed at scoring political points rather than protecting the public, some critics and legal experts said Wednesday.

Prime Minister Stephen Harper told a Toronto crowd his government will introduce new legislation next week to ensure that what he called the country's "most dangerous violent offenders" could not be allowed back on the streets.

The new bill will "ensure that for the most heinous offenders and the most horrific crimes, a life sentence in Canada will henceforth mean exactly that — a sentence for life," Harper announced in front of a crowd that included families of murder victims.

The legislation would apply to those convicted of first-degree murder involving: the killing of police officers or correctional officers; terrorism; kidnapping or sexual assault; and crimes "of a particularly brutal nature."

It would also apply to those who commit high treason, an offence that involves attempting to harm or kill the Queen, taking arms against Canada or helping an enemy at war with Canada.

While hesitant to judge the proposed changes until the bill is tabled, some critics and legal experts said the announcement raises several red flags.

"We already have a system that recognizes that the Paul Bernardos and the Picktons of the world should never be released," Liberal Leader Justin Trudeau said in Vancouver.

"I think a lot of this is campaigning on fear, which (Harper) is extremely good at, but I think we can all agree that bad criminals should not be released and we have to make sure that we're getting that balance right," he said.

"Most dangerous killers are already denied parole and held for life," NDP justice critic Françoise Boivin said in a statement.

"Sentencing reform should be focused on improving public safety, not on scoring political points. Decisions about who is released should be based on the risk an individual poses to the community and how to best protect public safety," she said.

"As things currently stand, the community is protected by the individualized judgments of a parole board," he said.

"The government appears to be asking the public to believe that they're currently vulnerable and will be safer as a product of this legislation. Based on what's been announced so far, I fail to see any way in which that's the case," he said.

A fundraising pitch issued on Wednesday says, though, that the Conservative Party can only protect Canadian families if they win the next election.

The subject line in the emailed pitch from Toronto MP Roxanne James reads "Murderers in your neighbourhood?"

Currently, those who are convicted of first-degree murder face an automatic sentence of life in prison with no chance of parole for 25 years.

According to the latest Correctional Service of Canada data on recidivism available, 658 convicted murderers were released on full parole between January 1975 and the end of March 1990. Of those, five were convicted of committing a second murder — three of first-degree and two of second.

"The recidivism rate for lifers in the community is very low, so the system seems to be working fairly well," said Catherine Latimer, executive director of the John Howard Society of Canada.

Harper said that in order to address constitutional concerns, under the new law, some killers serving life without parole will be permitted to petition the minister for public safety for release after serving no less than 35 years.

"This is not parole," Harper said. "Unlike parole, decisions will not rest with an appointed board but with the federal cabinet, men and women fully accountable to their fellow citizens and to the families of the victims of these crimes."

Several families whose loved ones were murdered said the legislation would spare others like them the trauma of repeatedly facing their relatives' killers in parole hearings.

If enacted, the changes would save families "a lifetime of misery, a lifetime of waiting for phone calls to come, emails to come, and preparing yourself mentally and physically for parole hearings," said Susan Ashley, whose sister, Linda Bright, was abducted, sexually assaulted and murdered by Donald Armstrong in Kingston, Ont., in 1978.

"You have no idea how much of a toll it takes on a human being."

Parole hearings for some offenders deemed more dangerous have already been spaced out to every five years rather than two, in order to shield the families of murder victims in cases where there is little chance of parole, Latimer said.

The proposed legislation fits into the Harper government's tough-on-crime agenda as it gears up for an election later this year and follows through on a promise made in the 2013 Speech from the Throne.

The Conservatives have added dozens of mandatory minimum sentences, from drug and gun crimes to sex offences — a move that has come under criticism from the opposition parties and some human rights groups.

--with files from Peter Cameron