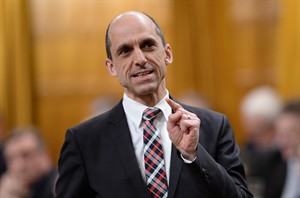 Minister of Public Safety and Emergency Preparedness Steven Blaney responds to a question during question period in the House of Commons on Parliament Hill in Ottawa on Thursday, March 12, 2015. THE CANADIAN PRESS/Sean Kilpatrick

OTTAWA - Public Safety Minister Steven Blaney is refusing to comment on reports that a spy enlisted by Canada is suspected of helping three British schoolgirls join the Islamic State group in Iraq.

Turkish Foreign Minister Mevlut Cavusoglu says the suspect — who is in custody — helped the teenagers even though he or she worked for the intelligence agency of a country that is part of the coalition fighting the Islamic State of Iraq and the Levant.

Cavusoglu didn't identify the country, but said it wasn't the U.S. or a European Union member.

A European security source familiar with the case told Reuters the person in question had a connection with the Canadian Security Intelligence Service.

A source told The Canadian Press the individual is not a Canadian citizen, nor an employee of CSIS, although intelligence agencies commonly recruit freelancers to carry out tasks.

In the House of Commons, NDP deputy leader Megan Leslie asked Blaney if the reports were true.

"Is Canadian intelligence involved and why are there persistent reports from the Turkish media on this?"

Blaney said he was aware of the reports, but quickly added, "I do not comment on operational matters."

Cavusoglu, who was interviewed on A Haber television, said he had shared the information with his British counterpart.

"Do you know who the person who helped the girls turned out to be?" Cavusoglu said. "Someone who works for the intelligence service of a country that is part of the coalition."

A Turkish government official told The Associated Press that the suspect has been detained for more than a week. The official spoke on condition of anonymity because of rules that bar officials from speaking to journalists without prior authorization.

In London, the Foreign Office said it was aware that an arrest had been made by Turkish police and said the girls' families had been informed.

"As soon as the U.K. received this information it was acted upon appropriately," the Foreign Office added, without elaborating.

The three girls — identified by British authorities as Shamima Begum, 15, Kadiza Sultana, 16, and Amira Abase, 15 — travelled from the U.K. to Turkey last month, from where they are believed to have crossed into Syria. Their journey highlighted the difficulty of halting the radicalization of young Muslims.

There has been tension between Turkey and Britain over who was to blame for the teenagers being able to sneak into Syria to join the extremist group, with Turkey accusing Britain of failing to notify authorities in time to stop them. The girls had boarded a flight for Istanbul on Feb. 17.

Earlier this month, a Turkish television station obtained video showing the teenagers at an Istanbul bus terminal before they boarded a bus to a city near the Syrian border.

— With a report from the Associated Press