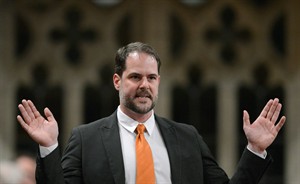 NDP MP Alexandre Boulerice asks a question during question period in the House of Commons on Parliament Hill in Ottawa on May 2, 2013. Controversy over the face-covering niqab worn by some Muslim women has exposed a rift among New Democrat MPs. Alexandre Boulerice, one of the party's most prominent Quebec MPs, says he doesn't believe public servants should be allowed to cover their faces. THE CANADIAN PRESS/Sean Kilpatrick

OTTAWA - Controversy over the face-covering niqab worn by some Muslim women has exposed a rift among New Democrat MPs.

Alexandre Boulerice, one of the party's most prominent Quebec MPs, says he doesn't believe public servants should be allowed to cover their faces.

"I don't care if people wear a paper bag on their head when they go to work," Martin said Friday. "It's none of our business."

That said, Martin added that he has no problem with Boulerice's suggestion that a pan-Canadian commission — along the lines of Quebec's Bouchard-Taylor commission in 2007 — should be created to find a consensus on how far the country should go to accommodate minority cultural and religious practices.

However, Dewar, whose riding is home to many civil servants, said there is no issue to resolve; he's never had a single complaint about public servants covering their faces.

"Why would you have a study on something that doesn't exist?"

Martin and Dewar were responding to comments Boulerice made Thursday amid a political uproar over Prime Minister Stephen Harper's assertion that the niqab is contrary to Canadian values and the product of an "anti-women" culture.

The controversy erupted last month after Harper vowed to appeal a court ruling that struck down a ban on face coverings worn during citizenship ceremonies. He called it "offensive" for someone to hide their face at the moment of joining the Canadian family.

The controversy escalated this week after Liberal Leader Justin Trudeau delivered a major speech in which he accused Harper of deliberately stoking prejudice against Muslims as part of a broader anti-terrorism agenda which seems to have boosted Conservative electoral fortunes.

Harper's tough-on-terrorism talk appears to have particular resonance in Quebec, where debate over the accommodation of minorities has raged for years, culminating in the Parti Quebecois government's doomed charter of Quebec values. The proposed charter, which would have prohibited public servants from wearing any obvious religious symbols, died with the defeat of the PQ last spring.

NDP Leader Tom Mulcair has said he agrees the judge was correct to strike down the ban on wearing a niqab while taking the oath of citizenship. And he's accused the Harper government generally of fuelling "Islamaphobia."

Nevertheless, he is more guarded on the niqab controversy than he was on the Quebec values charter, which he opposed vehemently. That may reflect the fact that 54 of the NDP's 94 MPs hail from Quebec.

Boulerice said Thursday that most of his caucus colleagues agree with him that public servants should not cover their faces.

"I, like most of my colleagues, we want to live in a society where people show their faces ... Most people expect to get a public service from someone whose face can be seen."

A caucus spokesperson said Friday that "Alexandre Boulerice gave his personal opinion. It is not the NDP position."

However, Mulcair did not object last spring when newly elected Quebec Premier Philippe Couillard said he intended to introduce a bill that would ensure civil servants who deal directly with the public do not cover their faces.

At the time, Mulcair said the proposal was "totally respectful of freedoms." Multiculturalism Minister Jason Kenney called it "totally reasonable," although there is no similar restriction on federal public servants.

Trudeau said he was confident Couillard, who has yet to introduce the bill, would respect the charter of rights.