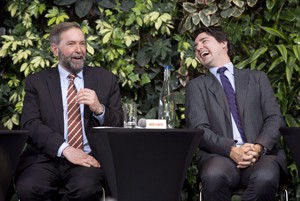 Liberal Leader Justin Trudeau laughs with NDP Leader Tom Mulcair as he speaks during a panel discussion on youth voting, Wednesday, March 26, 2014 in Ottawa. Mulcair is reiterating his openness to a possible coalition with the Liberals if it is necessary to topple Stephen Harper's Conservatives. THE CANADIAN PRESS/Adrian Wyld

MONTREAL - NDP Leader Tom Mulcair is reiterating his openness to a possible coalition with the Liberals if it is necessary to topple Stephen Harper's Conservatives.

While expressing confidence he will become prime minister with a majority government, Mulcair told reporters Tuesday the scenario of a minority government cannot be excluded and that turfing the Tories is imperative.

The Opposition leader accused his Liberal counterpart, Justin Trudeau, of putting personal interests ahead of those of Canadians.

Trudeau has repeatedly stated he's not interested in discussing coalitions.

The NDP leader said this year's election should be a three-way battle from the outset, paving the way for a social democratic government.

But if the Tories were to return, Mulcair has said a post-election alliance with the Liberals could be necessary.

A few years ago, when Liberal fortunes were plummeting, it was Mulcair who categorically ruled out a coalition.

In February 2014, Mulcair suggested his 2012 comments were intended to indicate only that he wouldn’t agree to any form of electoral co-operation with the Liberals during an election.

Mulcair reminded reporters on Tuesday that the NDP had concluded an alliance with the Liberals in 2008 but that the Grits reneged.

At the time, it wouldn't have been possible for the Liberals and New Democrats to form a coalition government without including the Bloc Quebecois, and dealing with the separatist political outfit was unpalatable to the Liberals.

"In 2008, our priority was to get rid of Stephen Harper and so we put water in our wine when we signed a coalition agreement with the Liberals," Mulcair said. "The Liberals raised their noses at their own signature and Stephen Harper is still there."

But Mulcair maintains his goal is to form a majority NDP government.

To do so, he's counting on a repeat performance in Quebec, where the party under former leader Jack Layton won 59 seats in 2011. Mulcair is hoping to do better, capturing 60 of a possible 78 seats in the province.

"We will win all the seats we already have in Quebec and we will add more — we are confident of that," Mulcair said, adding the party's policy resonates well with Quebecers.