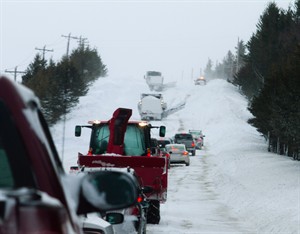 A section of the Trans Canada Highway in New Haven, P.E.I., is shut down as plows work on clearing the road on Thursday, March 19, 2015. THE CANADIAN PRESS/John Morris

The extra powers the city would get from declaring a state of emergency aren't necessary and the municipality has taken additional steps to deal with more than 50 centimetres of snow that fell Wednesday, he said.

Buses remained off the roads for most of the day because a buildup of heavy snow on a building where 60 per cent of Halifax Transit's fleet is stored made it unsafe to go inside. Service resumed Thursday afternoon but with a limited number of buses available.

Across Nova Scotia, which was hit hardest by the storm, government offices delayed openings and military bases in Halifax were closed for the day. Canadian Forces Base Halifax offered free parking for city residents as snow removal efforts continued.

The latest snowfall followed an earlier storm that saw more than 40 centimetres of snow blanket areas of the region.

"Mother nature is testing the patience of Nova Scotians at this point," said Premier Stephen McNeil.

Nova Scotia Transportation Minister Geoff MacLellan said the province is on track to spend about $75 million on snow clearing this year, which would be $17 million over budget.

The province has already spent $63 million this winter, which is $5 million more than it spent at the same time last year, he said.

"These are things that have to be done," MacLellan added.

"There's no holding back on budgetary amounts when it comes to snow clearing and safety, so we'll find the money for sure."

Southern New Brunswick and P.E.I. got 10 centimetres but high winds made it seem like blizzard conditions, he added.

"Central Nova Scotia was the hot spot, the sweet spot for this storm," MacKinnon said. "Most people know, once they are out there shovelling the driveway, they notice it was a lot of snow but it was pretty fluffy type stuff, so that's why we got those high accumulations, too."

The city of Halifax's chief administrative officer, Richard Butts, said the severe winter has also taken its toll on the money set aside for snow clearing, estimating the municipality will be $9 million to $10 million over budget by the time the season ends.

The city will spend what's needed to get things running at full capacity again, said Savage.

"Council has also been very clear that we need to put the resource to this challenge that needs to be done and we will do that, and we will manage the cost but at the end of the day we recognize that this is an extraordinary winter and it's going to require extraordinary measures," he said.