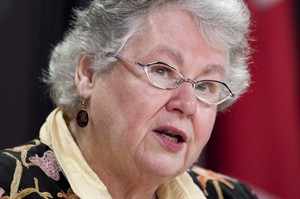 Senator Nancy Ruth speaks at a news conference in Ottawa on Thursday Dec. 16, 2010. The Conservative senator is miffed that she's being asked to justify claiming a meal expense while travelling when she could have eaten a free airline breakfast of "cold Camembert with broken crackers." THE CANADIAN PRESS/Sean Kilpatrick

OTTAWA - A Conservative senator is miffed that she's being asked to justify claiming a meal expense while travelling when she could have eaten a free airline breakfast of "ice-cold Camembert with broken crackers."

That's the level of detail Nancy Ruth says she's been subjected to by auditor general Michael Ferguson, who is conducting a comprehensive audit of senators' expenses.

Auditors have asked some senators to clarify their expenses, asking them to account for everything from single phone calls to sandwiches eaten during committee meetings to postage stamps. And they've been cross-referencing daily expense claims with cellphone records and senators' emails.

Ruth said Wednesday that she's been asked why she didn't eat free airline food rather than file breakfast expense claims on a couple of occasions.

"Well, those (airline) breakfasts are pretty awful," she said.

"If you want ice-cold Camembert with broken crackers, have it."

Ferguson was invited by the Senate in 2013 to conduct the audit following embarrassing revelations about allegedly improper expense claims by former Conservative senators Mike Duffy, Patrick Brazeau and Pamela Wallin and Liberal senator Mac Harb, who has since resigned.

Duffy, Brazeau and Harb have all been charged with fraud and breach of trust; the RCMP investigation into Wallin's expense claims is continuing.

Ferguson is expected to release the results of the audit in June.

Some senators have been grumbling privately for months about the intrusiveness of the audit and expressing fears that Ferguson doesn't understand the nature of their work.

Ruth gave voice to some of those concerns Wednesday.

"Most of their questions are not very sophisticated, nor do they really have anything to do with Senate business ... If I eat cold Camembert and soda crackers, is that Senate business? Don't ask. I mean, they're really weird."

Ruth also said she's "a little bit" concerned that the auditor is imposing a narrow definition of Senate business, whereas she believes
Senate business is very broad.

"I'm a feminist activist, so my angle on Canadian life is to look at gender-based analysis on policy and things like that. I don't think the auditor general particularly considers that Senate business," she said.

"I just don't think they understand anything of what it's like to fly around the world to get here to Ottawa," added Ruth, who lives in Toronto.

Most senators refused to talk about the audit Wednesday, citing confidentiality agreements they were asked to sign at the start of the audit process.

Conservative Sen. Don Meredith urged everyone to wait for Ferguson's final report before pronouncing on the process.

"Canadians have a right to know what's in that report and they should stop stalling it," he said, renewing his call for abolition of the "archaic, expensive and useless institution."

Liberal Leader Justin Trudeau, who booted all senators out of his party's caucus last year, said it's likely Ferguson's findings will further erode trust in parliamentary institutions. But he said it's a necessary step towards transparency, which is the only way to regain trust.

"I believe that the only way to fix this place is to actually open up ... and in order to get there, we're going to have to go through some difficult times."