Duffy the one on trial, but top Tory figures will land in defence’s sights 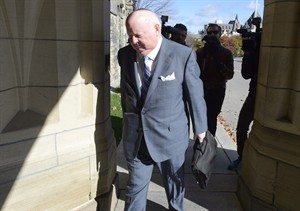 Sen. Mike Duffy arrives to the Senate on Parliament Hill in Ottawa on October 28, 2013. Suspended senator Mike Duffy may be the one on trial, but he won't be only person to see their motives, character and actions dissected, examined and critiqued over the next several weeks inside an Ottawa courtroom. THE CANADIAN PRESS/Adrian Wyld

OTTAWA - Suspended senator Mike Duffy may be the one on trial, but he won't be only person to see their motives, character and actions dissected, examined and critiqued over the next several weeks inside an Ottawa courtroom.

Beginning Tuesday, Crown lawyers will lay out their fraud, breach of trust and bribery case against the former Conservative — 31 charges in total.

But so too will begin attorney Donald Bayne's defence of Duffy, a counter-attack that will likely focus in part on the behaviour of key figures from the Prime Minister's Office and party circles.

The expected release of new documents and internal emails in the form of court exhibits has the capacity to breathe new life into the political scandal that consumed the House of Commons two years ago.

A crush of media interest in the trial has prompted officials to establish an overflow room at the downtown Ottawa courthouse where several camera angles are displayed on large screens in order to accommodate journalists.

Bayne has already given a public preview of sorts of how he plans to approach the allegations. Back in October 2013, Bayne held an animated press conference to respond to the looming suspension of his client from the upper chamber. Charges were laid in July 2014.

"You've seen a little of Sen. Duffy's evidence and side of the story," Bayne said at the time.

"It's simply the tip of the iceberg, if he ever had a proper hearing and an opportunity to advance this evidence. That's why we have trials."

That spring, news broke that the prime minister's chief of staff, Nigel Wright, had secretly paid for Duffy's $90,000 in contested living expenses. Duffy had submitted claims for a secondary residence in the Ottawa area, even though an audit said he spent approximately 30 per cent of his time at the designated primary residence in P.E.I..

Police allege Duffy was the one setting conditions and making demands in exchange for resolving the expenses controversy — hence the bribery charge. An email dated Feb. 13, 2013, in which Duffy's previous lawyer outlined a number of scenarios and conditions, is a central document.

Bayne and Duffy have alleged it's the other way around.

That concept — a political tactic orchestrated by Stephen Harper's underlings — is something Justice Charles Vaillancourt is likely to hear a lot about.

Wright's lawyers told police during an interview in June 2013 that he believed covering Duffy's expenses "was the proper ethical decision that taxpayers not be out that amount of money," according to the RCMP's court filing.

"He did not view it as something out of the norm for him to do, and was part of being a good person," the police said of a later interview with Wright.

Wright's friends have praised him as someone of impeccable ethics, guilty only perhaps of an uncharacteristic lapse in judgment.

In emails, Wright called the brewing controversy "our public agony," and spoke of Conservatives "circling the wagons."

One of the most revealing sets of internal emails filed in court involved the manipulation of a Senate committee, one drafting a report on Duffy's expenses in the spring of 2013.

PMO staffers set about ensuring the committee remove any negative language from the report on Duffy, and at one point discussed how to get an independent audit firm to refrain from drawing any conclusions on Duffy's residency status.

As the RCMP put it, there was a "moment of impasse" when a staff member in then-government Senate Leader Marjory LeBreton's office balked at the PMO's interference.

"Do I need to call Marjory?" Wright asked in an email. "They think they are hurting Duffy, but they will end up hurting the prime minister instead."

Duffy was also coached by PMO staff on what to say to the media about the repayment of his expenses.

"It's a scenario, in Nigel Wright's own words, that was created for Sen. Duffy not because he had anything to hide or he'd made inappropriate claims, but because the PMO had decided they wanted to sweep a political embarrassment to their Tory base under the rug," Bayne said in 2013.

The trial is scheduled to take place between April 7 and May 12, and from June 1-19.