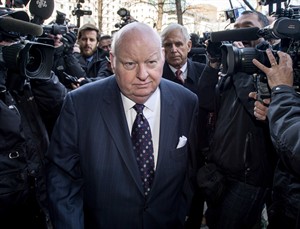 Suspended senator Mike Duffy, left, is followed by his lawyer Donald Bayne as he arrives at the courthouse for his first court appearance in Ottawa on Tuesday, April 7, 2015. The Senate expense scandal lands squarely back under the spotlight today as the long-awaited trial of suspended Conservative senator Mike Duffy gets underway in an Ottawa courtroom. The trial, currently scheduled to last more than 40 days, will give Duffy a chance to clear his name as he faces allegations of bribery, fraud and breach of trust. THE CANADIAN PRESS/Justin Tang

OTTAWA - A Crown attorney prosecuting Sen. Mike Duffy's fraud and bribery trial has contradicted Prime Minister Stephen Harper's position on who is eligible to sit in the Senate for a particular province.

Mark Holmes laid out the broad strokes of the Crown's case against Duffy in an Ottawa courtroom.

One of sets of charges involves living expenses, and alleges Duffy defrauded the government by claiming his primary residence was in Prince Edward Island while he actually lived in Ontario.

"Sen. Duffy was probably ineligible to sit as a senator, and to sit in the Senate as a representative of Prince Edward Island," Holmes told the court.

"He was constitutionally eligible to have been appointed from the province of Ontario, but that is not what happened."

Harper appointed Duffy to the Senate in late 2008, despite the fact Duffy had lived in the Ottawa area for decades. Duffy was a well-known former TV broadcaster who went on to be featured prominently at Conservative events and in promotional materials.

Later, when questions began to be raised in the media about how much time he spent in P.E.I., Harper defended Duffy's eligibility both publicly and behind the scenes.

The Constitution says that a senator "shall be resident in the province for which he is appointed," and must own property worth at least $4,000 in that province.

Harper's staff were insistent that the definition be accepted on its own merits, and not be subjected to any kind of additional interpretation or scrutiny.

To that end, attempts were made to ensure an independent audit firm and a Senate rules committee not delve into the area. Some of those actions were detailed in emails previously filed by the RCMP in court.

Duffy was also assured by Harper's former chief of staff, Nigel Wright, that his eligibility was not an issue — only whether he improperly billed his living expenses associated with the home near Ottawa.

"Mike could be primarily resident in the (Ottawa area) for expense rules and still constitutionally resident in P.E.I.," Wright wrote to Harper's then-executive assistant Ray Novak in February 2013.

Later, when the PMO was concerned that the Senate rules committee would look into the issue of constitutional eligibility, Wright and his staff talked about "circling the wagons" to ensure such an inquiry would go nowhere.

"I will advise Sen. LeBreton that we will not take any steps in the Senate to address residency for [constitutional] purposes unless anyone challenges the qualification of any of our senators, in which case we will defend (and defeat any motion regarding) any senator who owns property in the correct province and division," Wright wrote to former PMO lawyer Benjamin Perrin.

It was not immediately clear Tuesday how much time the Crown intends to spend on the question of Duffy's eligibility to sit as a P.E.I. senator. Some argue the Senate is the sole determinant of who should be eligible to join its ranks, Holmes noted.