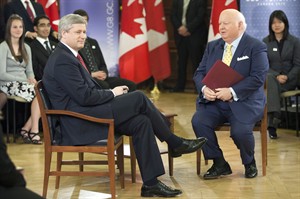 Prime Minister Stephen Harper, left, and Senator Mike Duffy speak to youth taking part in the G-8/G-20 National Youth Caucus on Parliament Hill in Ottawa on Monday, May 17, 2010. The prime minister might have had his makeup done alongside Sen. Mike Duffy in 2010 on one of their many appearances together, but a government source says the taxpayer didn't pick up the tab for that type of service. THE CANADIAN PRESS/Adrian Wyld

OTTAWA - The prime minister might have had his makeup done alongside Sen. Mike Duffy in 2010 on one of their many appearances together, but a government source says the taxpayer didn't pick up the tab for that type of service.

Still, one month earlier, taxpayers did foot the bill for Stephen Harper's makeup artist to travel overseas for the 65th anniversary of the liberation of the Netherlands.

The fact that Harper and Duffy employed the services of the same makeup artist surfaced in court earlier this week.

Duffy, a former Conservative, is facing 31 charges of fraud, breach of trust and bribery. Some of those charges involve allegedly illegal Senate contracts, including one given to local makeup artist Jacqueline Lambert.

Defence lawyer Donald Bayne said Tuesday that Duffy had his makeup done for a G8/G20 national youth caucus event in 2010, and that Harper received the same service that day.

"The $300 (contract) paid not only Sen. Duffy's perfectly standard makeup for television — it's always done — but Ms. Lambert made up the prime minister of Canada," Bayne said in court.

"There's no way the G8 conference was not validly related to Sen. Duffy's public business."

That event, which took place on Parliament Hill, featured Harper and Duffy in conversation on the same stage, surrounded by students whose questions had been vetted in advance. A photo from the event showing the pair having a discussion on stage, was entered into evidence Thursday at Duffy's trial.

As the trial progresses, the defence is expected to emphasize that Duffy was called upon frequently by the Prime Minister's Office to participate in events.

A government source, not authorized to discuss the matter publicly and so speaking on condition of anonymity, refused to comment on a matter before the court, but did say that "these services are not paid for by taxpayers."

In fact, the taxpayer has picked up bills in the past for another Harper stylist, and around the same time period. Michelle Muntean travelled around the world with Harper, applying makeup, styling hair, selecting clothing and trimming nails.

In 2007, Harper's office told The Canadian Press Muntean's expenses were covered by the Conservative party.

But the Public Accounts of Canada, the government's annual spending report, tell a different story: the Department of Foreign Affairs paid her travel expenses, including flights, meals and accommodation. The records for 2009-2010, for example, show she travelled with Harper on 13 different trips.

In May 2010, the records show that she accompanied Harper to the Netherlands.

The NDP once tabled an official question in the House of Commons on who paid Muntean's salary, and was told that no such contract existed. Harper's team said the party paid for her salary.

Duffy's payment of Lambert occurred through an unusual $65,000 master contract that he had arranged with Gerald Donohue, a former broadcasting friend.

Through that umbrella fund, Donohue's company paid out other service providers, including Lambert.

The Crown has alleged Duffy set up that system so that Senate finance officials could not see how he was spending taxpayer money. But Bayne has argued that Duffy is guilty of nothing more than administrative process irregularities.