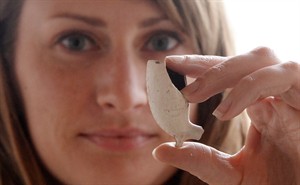 Archeologist Nadine Kopp holds up a pipe bowl decorated with a 'Coureur De Bois' as she speaks about artifacts found during two archeological digs on Parliament Hill in Ottawa on Friday, April 10, 2015. The sites dating back to the early 19th century were found during the ongoing Parliament Hill restoration project. Tens of thousands of objects were excavated with most of them coming from a 'Midden' (dump site) at an officers barracks. THE CANADIAN PRESS/Sean Kilpatrick

OTTAWA - If Parliament Hill has sometimes seemed throughout its history like a boozy, male-dominated powder keg, it's worth noting that's partly what it was built on.

Recent archeological digs outside some of the main buildings in the precinct have turned up tens of thousands of artifacts from the early 19th century.

They tell a story of life before Sir John A. Macdonald, before MPs and senators, and before Ottawa was even called Ottawa.

Starting in 1827, the area that is now Parliament Hill was called Barrack Hill, a staging ground for the British Royal Engineers to undertake the construction of the nearby Rideau Canal. It was overseen by Lt. Col. John By — for which Bytown (now Ottawa) was named. It remained a military area until 1858, when Queen Victoria designated the site the future capital.

When crews began to dig to the west and to the east of Parliament's Centre Block last year for construction projects, they began to find evidence of that earlier incarnation. Archaeologists were called in to excavate the sites with small trowels.

On the east side, near a Senate parking lot, they found evidence of the foundations of the former powder magazine. It's believed that most of that limestone foundation structure is intact under an existing statue of Queen Elizabeth.

On the other side, north of the West Block, they found something even more significant — essentially the garbage dump, or "midden," of the former officers' quarters. Such discoveries can tell researchers heaps about a way of life in a particular era.

Nadine Kopp, a project archaeologist with the Paterson Group, oversaw the digs for the Department of Public Works. She lights up as she sifts through numbered plastic bags full of pottery shards, bits of weaponry, bottles and other treasures.

"You wouldn't typically expect to find a military site in downtown Ottawa, so it was really interesting, and really interesting that we found this intact, with all the construction that has taken place on the Hill since 1859," Kopp said.

"It's amazing that it was still there and preserved."

— A completely intact, long and thin opium bottle — a common remedy in the day for different aches and pains, as well as cholera.

— Two Catholic religious medals, unusual because most of the British officers would have been Protestant

— Several smoking pipes, including an unusual one engraved with a beaver and a coureur de bois.

— Personal grooming tools such as a lice comb and a toothbrush.

— Thousands of pieces of pottery and china imported from England.

— An intact Lea & Perrins Worcestershire sauce bottle and a mustard jar, the kind of condiments an officer might use to spice up his food.

"When you think of early Bytown, it's often portrayed as a swamp, as a back country area, but it's interesting to see the officers still enjoyed a gentlemanly life that was expected of them," said Kopp, who has worked on other archeological digs on Canadian military sites.

There was lots of evidence of drinking — wine bottles, beer bottles, champagne bottles, tumblers and glasses.

"Officers did drink quite a bit," she said.

"It was all part of their dinner that they would have enjoyed, and the advantage they would have had as officers because the rank-and-file of the military weren't allowed to drink on site."

Sifting through the dirt also gave the archaeologists a sense of the diet of these officers. There were many butchered cow, sheep and pig bones, but also fish and game they caught to make their cuisine more interesting — geese, wild turkey, catfish and the now-extinct passenger pigeon.

Oysters and cod sometimes got shipped in from the East Coast, as evidenced by the shells and bones found in the dig.

Ottawa historian Don Nixon, in his book "The Other Side of the Hill," described the environment on Barrack Hill and how cows and horses used to graze there. The buildings faced towards the Ottawa river, rather than out onto what would become the modern downtown core.

"Looking through [the trees] from their front verandas the soldiers had the most wonderful view of the sweeping river, the thundering falls, the green forest and the hazy mountains in the distance beyond," Nixon wrote.

The officers' quarters became government offices after Confederation in 1867, but burned down in 1874.

"By finding actual artifacts in context, from the barracks, we can better learn about the actual people that lived there, and that's what archaeology's all about, learning about the people from the past," said Kopp.

Public Works says it will transfer the artifacts to interested Canadian museums.