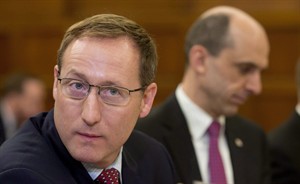 OTTAWA - The Conservative government says its sweeping anti-terrorism bill is constitutional, but verifying that assertion could cost an Ontario man almost $5,000.

Lawyer Jack Gemmell wants to see the federal government's legal opinions and memos spelling out why it believes the proposed legislation is consistent with the Charter of Rights and Freedoms.

Gemmell says he was disappointed when the Justice Department asked for $4,772.80 in Access to Information fees just to get his written request to the next step.

The fee assessment is based on the more than 477 hours the department says it needs to locate the records in question.

"I expected a more business-like answer rather than getting the business," Gemmell said in an interview.

Gemmell has particular concerns about an element of the bill that would create a new criminal offence of encouraging someone to carry out a terrorism attack. The measure would place undue limitations on free speech, encompassing religious expression and even private conversations, he said.

"There are serious problems with the constitutionality of this provision."

The bill, currently before the Senate, would give the Canadian Security Intelligence Service more power to thwart suspected terrorists' travel plans, disrupt bank transactions and covertly interfere with radical websites.

In addition, the legislation would make it easier for the RCMP to obtain a peace bond to restrict the movements of suspects and extend the amount of time they can be kept in preventative detention.

Gemmell, who helped the Law Union of Ontario prepare its comments on the federal bill, has appealed to the federal information commissioner about the fees levied in his request.

The lead Justice Canada lawyer on the bill was unavailable for an interview Monday, a department spokesman said.

During House of Commons committee hearings, the bill's compliance with the charter was questioned by several witnesses, including a former chairman of the Security Intelligence Review Committee, the watchdog that keeps an eye on CSIS.

NDP public safety critic Randall Garrison asked Justice Minister Peter MacKay to table the advice he received on the constitutionality of the legislation. "It would be very useful for this committee, to avoid further legal entanglements down the road," Garrison said.

MacKay assured Garrison the legislation had been vetted by his officials.

Gemmell said he expected a similar answer about legal privilege in response to his Access to Information request — one he was prepared to challenge.

Instead he was told the extensive search must be undertaken before any final response could be considered.

Given MacKay's familiarity with the legal advice, Gemmell was puzzled by the department's insistence on the need for hundreds of hours to locate it.

"I assumed this would be something readily accessible."