No checks on whether work actually done under senators’ contracts, court hears 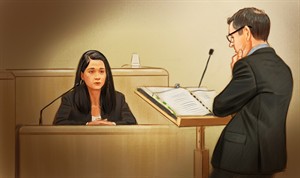 OTTAWA - Senators hand out plenty of work contracts, but officials don't check whether anything actually gets done, nor who ultimately does the job, an Ontario court judge was told Tuesday during the trial of Mike Duffy.

Duffy's defence lawyer Don Bayne used his cross-examination of a Senate official to make the case that the now-suspended senator was operating within the system as it existed — with broad rules and light oversight.

The former Conservative faces 31 charges of fraud, breach of trust and bribery, including a set that involve $65,000 in contracts set up through the company of Ottawa friend Gerald Donohue.

"Sen. Duffy's contracts and the amount of detail in them and the way he described his requests are like any other senator?" Bayne asked Senate human resource officer Sonia Makhlouf.

"This contract that you've approved and the commitment of public funds for all 105 senators, you don't know what actual work was done at all in the contracts?" Bayne asked.

"No, because it's at the discretion of the senator," Makhlouf replied.

The Senate human resources office approved contracts given out to a firm owned by Donohue, a former local TV executive. Duffy said he was to do research and consulting work, including advising him on issues involving the aging population.

But Donohue's firm didn't do all the work under that $65,000. He sent cheques to other service providers, outside the scrutiny of Senate administrators and apparently on Duffy's behalf. Among them was an office volunteer who received $500, a photo developing store that produced $1,578 of materials, and a makeup artist who prepared Duffy for an event with the prime minister.

Bayne took Makhlouf and the courtroom through some of the myriad guidelines, orientation pages, reports and rules that govern how senators are supposed to run their offices and conduct their business.

Since the trial began last week, Bayne has argued that Duffy abided by the rules on the books and, if anything, is guilty of administrative process errors and nothing criminal.

Here are some of the explanations, derived from the testimony:

— An Orientation Guide for New Senators and office expense guidelines provide a broad definition of research, with no specific limitations on what that entailed. Thus Donohue's verbal advice to Duffy is argued to be legit.

"The research work that is delivered to you, it doesn't have to be a written product, does it? It might be advice about regional issues, it might be advice on what you're working on as a senator, if it's advice given?" Bayne asked Makhlouf.

— Volunteer Ashley Cain falls under the description of staff within the Senate's administrative rules. Another section underlines a senator is entitled to hire and pay staff.

— Photographic and publicity services are legitimate office expenses (albeit not described under service contracts) under the guidelines for senators' research and office expenses.

— Senators have the prerogative to change the personnel they select for the contract, without having to get approval, under a key Senate report passed in 1988. Bayne referred to this apparently to bolster the argument that subpayments were above board.

Bayne also highlighted that the Senate itself had found that its network of rules and procedures could be hard to navigate. A 2010 Senate committee report on internal audits pointed out there were 12 documents for the processing and administration of office expenditures.

"There is a risk of inconsistent application of policies and understanding of the policies across senators' offices," the report said.

Said Bayne: "The senators are not, coming from a wide variety of backgrounds, they're not the experts on the rules, right?"