Quebec premier distances himself from ex-colleague accused of fraud 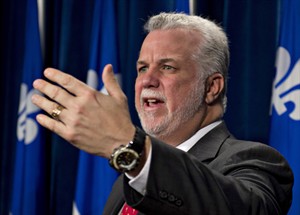 QUEBEC - Quebec Premier Philippe Couillard said Wednesday his critics are trying to destroy his character in order to distract people from what he called the recent successes of his government.

He called a news conference Wednesday to address "false allegations" and "accusations of guilt by association" by the opposition regarding two separate incidents.

A Montreal newspaper reported that a former colleague of his has been accused of financial fraud.

Couillard denied he has anything to do with the fraud allegations against Hans Peter Black, an ex-colleague on the board of directors of a medical research company called Amorfix Life Sciences.

Couillard was president of the company's board of directors between 2010 and 2012, a period in which he was out of politics.

"What Mr. Black is being accused of is tied to his investment company," he said. "It has absolutely nothing to do with me or with Amorfix and I want to repeat that clearly."

The newspaper also revealed Wednesday that Quebec's securities regulator had investigated and fined Interinvest in 2012.

Couillard said the board at the time didn't know the securities regulator was looking into Black.

The interim head of the Parti Quebecois, Stephane Bedard, said Couillard — as head of Amorfix's board — had the responsibility to ensure the integrity of board members.

Couillard also criticized the PQ for suggesting on Tuesday, while he was busy hosting a summit of provincial leaders in Quebec City, that he played a role in the awarding of a $100-million government loan to a company he used to work for.

The premier was on the board of mining company Canadian Royalties for a few months in 2009. It recently received the $100-million loan from the provincial government's investment arm.

"I have had absolutely no contact with the company since 2009 and have no financial interest in it, that's for sure," he said. "At no moment did I intervene on behalf of that company."

Couillard suggested his political opponents are trying to sully his character because the government is doing well.

"The economy is getting back on track, the budget is balanced, you've seen the success we've had with climate change issues, with investment projects in Quebec's northern territory," he said.

"You can expect there will be an effort to demolish all that."