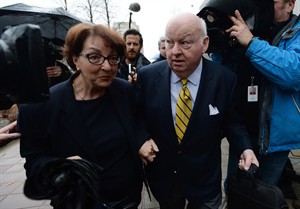 OTTAWA - Stephen Harper's name surfaced at the Mike Duffy trial Thursday as court heard from a string of contractors who were paid through a taxpayer-funded account that the suspended senator allegedly used to skirt finance rules.

A former intern, a makeup artist and a personal trainer all described being paid by companies run by Duffy's long-time friend Gerald Donohue for services they provided to the senator — and in one case, to the prime minister as well.

The cheques form the basis for six of 30 fraud and breach of trust charges faced by Duffy, in addition to a single count of bribery involving a cheque that came from Harper's former chief of staff.

Duffy has pleaded not guilty to all of the charges.

Cheques cut by Maple Ridge included $300 sent to Lambert, who had known Duffy for years in his role at CTV.

She was first called to do his makeup as a senator in 2009, for a photo shoot, and Duffy told her to send him the invoice personally. A letter introduced earlier in court from the Senate showed the expense wasn't approved.

In 2010, he called again — this time to do makeup for both him and Harper at a televised G8/G10 event on Parliament Hill. He told her to send her $300 invoice to Maple Ridge.

Last week, a government source told The Canadian Press that the makeup services Harper received that day weren't paid for by taxpayers.

"On this occasion of the G8, did Prime Minister Harper pay you anything for the services he received, or did you take the $300 to be payment in respect to the services you provided the prime minister?" asked Duffy's lawyer Donald Bayne.

Court has already been told the $300 was a flat-rate fee that would not have changed regardless of whether one or two people had their makeup done.

Stephen Lecce, a spokesman for the Prime Minister's Office, continued to insist Thursday that taxpayers didn't pay for Harper's makeup.

"We have no knowledge of the invoice in question," Lecce said in an email. "We did not charge taxpayers for the PM's preparation for this event and had no reason to believe anyone else would do so."

A copy of the invoice Lambert sent wasn't submitted as evidence; her computer crashed and she no longer had a copy, court was told. She did say, however, that it would have referenced services provided to both Duffy and Harper.

A copy of the cheque she received indicated that it came from Donohue's company. On the envelope, there was a notation that it was for "PM and Mike."

Lambert said she was always paid for doing makeup for parliamentarians, including Harper. When she did the makeup for former finance minister Jim Flaherty, the invoice went to the Conservative party, court was told.

The original contracts between Duffy and Donohue stated they were for editorial services, but the Crown has alleged those specific services were never delivered, with the money being funnelled elsewhere to cover costs Duffy couldn't expense to the Senate.

Duffy's lawyer argues the work done was entirely in keeping with parliamentary business and within Duffy's authority as a senator to sub-contract tasks.

Ashley Cain, a former Duffy intern said she was also paid by that same company, having received a $500 cheque after she'd been told she was doing good work in the senator's office and he'd find some money for her.

Until 2009, he was paid by Duffy directly for hour-long training sessions, court heard. After that, he began helping the senator with a project on getting older adults more active. Duffy told him to send his bills to Donohue's companies. The project never materialized.

The consulting work consisted of conversations on issues like the baby boomer generation, health and fitness and the publishing industry, court heard. The conversations took place while Duffy was working out.