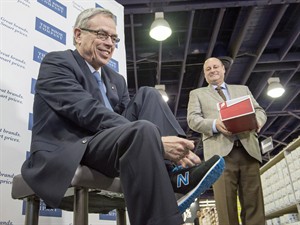 Federal Finance Minister Joe Oliver tries on his new budget shoes with the assistance of Bruce Dinan, president of Town Shoes, during a photo op in Toronto on Monday, April 20, 2015. THE CANADIAN PRESS/Frank Gunn

OTTAWA - The symbolism of Finance Minister Joe Oliver donning a pair of Tory blue sneakers Monday for the traditional new-budget-shoes photo opportunity shouldn't be lost on anyone.

A federal election date may yet be six months away, but Tuesday's promised delivery of the Harper government's first balanced spending blueprint in eight years means the Conservatives are already off and running.

In fact, the well-orchestrated march to the 2015 general election began more than a year ago, when the government presented a 2014 budget that, it turns out, could have reasonably showed a surplus — but held off the big reveal until Canadians were closer to the ballot box.

The parliamentary budget office last week predicted 2014-15 will come in $3.4 billion in the black — a possible jump start on those "New Balance" runners Oliver slipped on at a Toronto shoe store.

The long march continued last Halloween at a campaign-style event in Vaughan, Ont., where Prime Minister Stephen Harper rolled out a five-year, $27-billion package of improvements to family benefits and targeted tax cuts — a sort of rolling campaign barrage timed to light up the fireworks in July when families receive their first retroactive benefit cheques.

The simple electoral arithmetic of tax breaks and benefit boosts was on display Monday in the House of Commons.

"In my riding of Oak Ridges-Markham, (constituents) get up every morning, they get to work and what they want their government to do is put more money back in their pockets to invest in their priorities," said Paul Calandra, Harper's parliamentary secretary, who holds one of the coveted 905 area code ridings around Toronto.

These large set pieces of the Conservative re-election campaign will be augmented Tuesday with a host of smaller measures aimed up shoring up perceived weaknesses and bolstering perceived strengths.

Help for seniors — a key Conservative voting demographic that's growing as the baby boomers pass 65 — is also expected through changes to registered retirement income fund rules and a long-promised doubling of the $5,500 annual limit on tax-free savings accounts.

There will be cash for the national security apparatus, a big government selling point in this season of domestic terror attacks and overseas military missions.

The budget is also expected to include a significant extension to the compassionate leave granted to caregivers to look after seriously ill loved ones, government sources say.

There will likely be targeted infrastructure funding for major public transit projects, spending the government will promote as "green" to help cover a weak environmental policy flank while wooing those suburban commuters Calandra referenced.

And there may be measures to bolster manufacturing, small businesses and skills training as the Conservatives attempt to buff their job creation credentials.

Headlining it all will be the return to surplus, backstopped by proposed balanced budget legislation.

And while the dramatic plunge in global oil prices — which spurred Oliver to delay his budget release by a month or two this spring — is viewed by some to have tripped up Conservative budget plans, it had one welcome side effect for a government heading to the electorate.

Elly Alboim, a principal at Earnscliffe Strategy Group and former adviser to former Liberal finance minister Paul Martin, said the Conservative fiscal framework laid out in the budget will fetter the opposition parties.

"By eliminating two (percentage) points off the GST and then giving away other tax room, they have made the framework impervious to policy," said Alboim.

Don Drummond, a former Finance Canada official and bank economist who is currently a visiting scholar at Queen's University's School of Policy Studies, said the government may be "kind of hanging on the edge" of surpluses for several years, but that's not a bad political position.

"Anything new anybody offers is going to have to be paid by cancelling or reducing something that already exists," Drummond said in an interview.

The bigger question, he said, is whether Conservative austerity, now into its sixth year, is sustainable.

"Unfortunately you won't get answers to questions like that with the budget," said Drummond, characterizing it instead as, "'Here are the numbers and life is great.'"