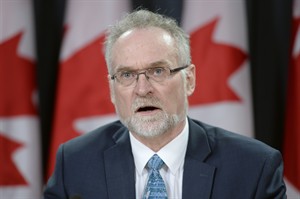 Auditor General Michael Ferguson speaks at a news conference in Ottawa on Tuesday, April 28, 2015 followingthe tabling of his spring report to Parliament. THE CANADIAN PRESS/Adrian Wyld

OTTAWA - The quality of health care in remote First Nations communities is sorely lacking, the federal auditor general reported Tuesday — a conclusion that aboriginal leaders call a further indictment of how they are being treated by Ottawa.

The audit concluded that only one out of 45 nurses had completed mandatory Health Canada training to allow them to perform advanced duties such as immunization, cardiac life support and handling controlled substances — a problem the federal department identified in 2010.

It also documented the dismal state of nursing stations in the regions, noting that in one case, a nursing station residence had been unusable for more than two years because of a broken septic system.

The report also found nurses had no support system in place when required to perform essential health services beyond their scope of practice. It also uncovered problems with the medical transportation system that allows patients to receive treatment that's only available outside their communities.

Some First Nations members were not properly registered for the transport benefit, and there was also a glaring lack of documentation to show that the health care was actually needed or delivered.

"The report is a strong indictment on Canada's continued failure to provide a health care system that is equitable, that is accessible," Fiddler said.

He said a pair of four-year-olds — a boy and a girl — died needlessly last year from strep throat, which could have been prevented with simple antibiotics.

Health Canada agreed with the auditor's recommendations to fix those deficiencies, a development that the Liberal health critic, Dr. Carolyn Bennett, said could finally lead to progress.

"They're now on record as to what they do about it," Bennett said. "It's a very straightforward process now, and we need to see the plan from Health Canada."

Manitoba Keewatinowi Okimakanak Grand Chief David Harper said he hoped Ferguson's report would pave the way for gains in education and prevention to increase the long-term health of remote communities.

"At the same time, we need to educate our youth to become nurses and doctors."

In separate audits included in Tuesday's report, Ferguson also touched on some key planks of the government's likely election platform — cutting taxes and protecting Canadians by getting tougher with criminals.

"We are concerned that the issues we are seeing today may be the symptoms of bigger problems in the future if they are not addressed quickly," Ferguson said.

Ferguson found that lower-risk offenders are being released from prison later in their sentences and with less time supervised in the community because Correctional Service Canada recommends early release less often.

Some 80 per cent of offenders were behind bars beyond their first parole eligibility date, while more offenders are being released directly from medium- and high-security penitentiaries.

A separate audit of Correctional Services Canada appeared to dovetail with the Conservative government's tough-on-crime agenda, but stressed the safety of the public is better served by a system than can offer rehabilitation before an inmate is set free.

It found that CSC officials made fewer recommendations for early release to the Parole Board in 2013-14 than in 2011-12, including low-risk offenders, who as a result ended up spending less time being supervised in the community before their sentences ended.

The audit said only one in five offenders had parole hearings when they were first eligible, while 54 per cent walked out of federal prisons at their statutory release date rather than being on parole earlier in their sentence.

The supervised release of offenders "who have demonstrated responsibility to change contributes to public safety," it found.

But a spokesman for Public Safety Minister Steven Blaney said in an email: "I am pleased that the auditor general found that our 'truth in sentencing' measures have worked because more prisoners are staying behind bars for a greater portion of their sentence."