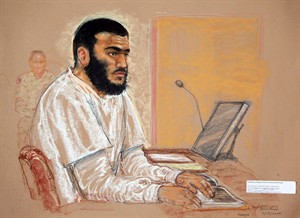 Canadian defendant Omar Khadr sits during a hearing at the U.S. Military Commissions court for war crimes, at the U.S. Naval Base, in Guantanamo Bay, Cuba, Jan. 19, 2009. The federal government is planning to seek an emergency stay of an Alberta judge's decision to grant former Guantanamo Bay prisoner Omar Khadr bail, The Canadian Press has learned. THE CANADIAN PRESS/AP, Janet Hamlin, Pool

The application, expected to be heard Tuesday before the province's Court of Appeal, would come just hours before another court hearing scheduled to decide on his release conditions.

"The Harper government is not interested in the rule of law," Dennis Edney, one of Khadr's lawyers, said in response.

"It refuses to listen to what the courts have said about Omar Khadr's rights. It continues to spend millions of taxpayers dollars only to lose time and time again."

A spokesman for Public Safety Minster Steven Blaney confirmed the stay request in a statement late Sunday, saying the government would fight against any attempt to lessen his sentence.

On April 24, Court of Queen's Bench Justice June Ross decided that Khadr, 28, should be released while he appeals his conviction for war crimes in the United States.

Ross made it clear — and government lawyers didn't object — that the Toronto-born Khadr has been a model prisoner who poses little risk to the public and should be allowed out.

The government had argued that Ross had no jurisdiction to make that call given that his return from Guantanamo Bay in September 2012 occurred under an international prisoner transfer treaty.

The government also said that granting him bail would undermine Canada's international relations and obligations — a position Ross rejected.

Ross had set a Tuesday afternoon hearing to decide on Khadr's release conditions, which were expected to be relatively standard, but require him to live with Edney and his wife, Patricia.

Hours after Ross's decision, the federal government, which has insisted on branding Khadr an unrepentant terrorist, said it would appeal her ruling.

However, more than a week passed without word on whether Ottawa would try to block his release pending its appeal.

Currently incarcerated as a minimum-security inmate in Bowden Institution near Innisfail, Alta., Khadr has spent almost 13 years in custody since American soldiers captured him as a badly wounded 15 year old in Afghanistan in July 2002.

Ross's decision sparked joy among Khadr's supporters, who view him as a child soldier or victim, and anger among his detractors, who see him as a hardened jihadist.

His lawyers said Khadr had been trying not to get his hopes up for freedom knowing the government's intention to fight his release.

Khadr has said he only pleaded guilty to war crimes before a widely discredited U.S. military commission in 2010 to get out of Guantanamo Bay.

In her ruling, Ross said Khadr had strong grounds to appeal the conviction in light of other American civilian court decisions that have overturned guilty findings in similar circumstances.

However, Khadr's lawyers said the American appeal process could be rendered moot even if he's successful because it might not be concluded before he finishes serving the eight-year term the commission gave him.

"This is a circumstance where balancing a strong appeal and the public confidence in the administration of justice favour the same result," Ross said in her decision.