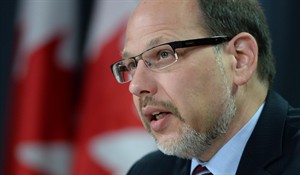 Howard Sapers, Correctional Investigator of Canada, holds a news conference in Ottawa on Wednesday, October 8, 2014. Sapers has been told by the Harper government he's out of a job as soon as a replacement can be found.THE CANADIAN PRESS/Sean Kilpatrick

OTTAWA - Canada's hard-hitting corrections investigator Howard Sapers has been told by the Harper government he's out of a job as soon as a replacement can be found.

Sapers has been given a temporary contract of up to a year while the government searches for "suitable replacement candidates" to take over the role of prison service watchdog, a spokesman for Public Safety Minister Steven Blaney said Tuesday.

In an interview, Sapers said he was not told why he's being terminated, nor did Blaney's office publicly provide a reason.

Sapers said he went to the government a year ago and expressed an interest in continuing in the job when his appointment was up for renewal. He also asked that he be given six months' notice if the government intended to replace him.

"It's a very small office and so a change of leadership has a lot of impact. I wanted to make sure there would be a good transition if a transition was going to take place," said Sapers.

He was not given notice and his temporary Order in Council reappointment wasn't signed until March 31, the last day of his term.

Public Safety provided no rationale for Sapers' dismissal other than the fact that he had been in the job for more than 10 years.

"We thank Mr. Sapers for more than a decade of service as correctional investigator and we wish him all the best in his future endeavours," spokesman Jeremy Laurin said in an email.

Sapers has been a vocal ombudsman for prisoners since he was first appointed in 2004. He was reappointed twice by the Conservatives, most recently in 2012.

Among a number of reports that have caused the Conservative government some discomfort was Sapers' recommendation that Omar Khadr, the former child soldier and Guantanamo detainee, be given a lower security classification in light of his exemplary prison record.

His most recent annual report, delivered last October, took the government to task for reducing parole options and freeing unprepared inmates without adequate supervision. In 2013 he flagged the growing and disproportionate numbers of aboriginal and visible minority inmates, and he has warned that an overcrowded, underfunded corrections system is taking Canada back to the 1970s when violent prison riots rocked the country.

"An ombudsman's role is to comment on maladministration," Sapers said Tuesday.

"So when we investigate an issue and we find fault, we make recommendations. Those recommendations are aimed at improving outcomes and improving the process and ensuring that, in this case, the Correctional Service of Canada complies with its legal and policy framework."

Opposition critics say he joins a list of government watchdogs who have been removed by the Conservatives after pointing out policy problems in the course of their duties.

"This government does not like critics," said Liberal critic Wayne Easter, a former solicitor general.

"For a government that was elected and talked about accountability and transparency, we're seeing anything but. We see this time and time and time again."

NDP public safety critic Randall Garrison said that in the absence of an explanation for Sapers' termination, "one can only assume there must be some other motive. That's the obvious one."

Garrison said leaving Sapers and his office in limbo is simply bad management.

Sapers has no idea how long his temporary employment will continue and says he's not aware that the search for his replacement has begun.

The corrections investigator's office receives about 20,000 contacts each year on its toll-free line from inmates and their families, resulting in thousands of files being opened and daily investigations, he said.

"There's a lot to keep me busy and there's lots to be focused on and I plan to keep doing that work until they tell me to leave."