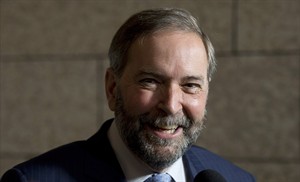 OTTAWA - Gleeful federal New Democrats seized the coattails of their victorious Alberta cousins on Wednesday, but while the two parties share the same family tree, the Prairie and Ottawa branches have fundamental differences.

For one, experts point to the roots of the Prairie New Democrats, which they say come from the anti-centralist mindset that dominated Canadian politics for much of the 20th century.

The Alberta NDP also hails from a province where the economy is dominated by the pollution-heavy oil industry, which has been a bull's-eye for criticism from federal New Democrats, said a political scientist who has studied Alberta politics for decades.

"The areas of difficulty (between the two NDP parties) would not be huge, but ... there could well be some," said Allan Tupper of the University of British Columbia.

Potential family feuds, he added, could arise when it comes to climate change and the taxation of the energy industry.

Differences between the parties, however, didn't stop the federal NDP on Wednesday from inviting news cameras into its caucus chamber, where chanting MPs celebrated the Alberta win in the name of all New Democrats.

In a short speech to his caucus, a grinning Mulcair said doubters never thought the NDP could win in Alberta or Quebec, where the federal party captured more than 50 seats in 2011.

"We've all got a spring in our step today and it's understandable," he told reporters in Ottawa.

The federal NDP also wasted little time in trying to capitalize on Notley's momentum. The party distributed a fund-raising email with the subject line: "Alberta made history last night."

During the campaign, however, Notley appeared to take pains to distance herself from Mulcair.

When Progressive Conservative rival Jim Prentice mentioned Mulcair's opposition to pipelines, Notley insisted she had not spoken with him for "months and months."

Mulcair, who has said he opposes lines that ship raw product for refining abroad, has been a polarizing figure on pipelines in Alberta.

On Wednesday, Notley was asked again about her connection to Mulcair and the federal party.

"I have a great deal of respect for Tom Mulcair," Notley told a news conference.

"I think he's a great national leader, but my job is going to be to focus on being the premier of Alberta and representing the interests of Albertans."

Robin Sears, a former NDP strategist, said New Democrats from Alberta share "common DNA" with their Prairie counterparts rather than with those from B.C., Ontario and Ottawa.

He described them as proud in the traditions of Prairie protest against big railways, big banks and Central Canada. Sears believes they would likely take inspiration as well as ideological and operational cues from Saskatchewan's NDP legacy.

Notley said she spoke to former NDP Saskatchewan premier Roy Romanow after the election and looked to him for advice on the government's transition.

A federal NDP spokesman sent out an email highlighting where the parties share common ground. He wrote that both believe in new relationships with First Nations, that resource development should be conducted in an environmentally sound way and that corporations "should pay their fair share."

Sears thinks the federal NDP does have something to celebrate following Notley's win. He predicts it will boost morale, fundraising and probably candidate recruitment ahead of the October federal election.

But Tupper said he doubts the win will translate into party gains at the federal level.

"I don't say it won't happen, but I don't see it obviously happening because of the separation of the parties, the differences between them and the general different rhythms of provincial and national politics."