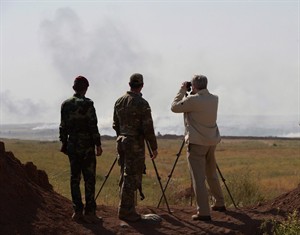 Prime Minister Stephen Harper, right, looks out towards ISIL fighting positions as he visits members of the Advise and Assist mission 40 kilometres west of Erbil, Iraq, on Saturday, May 2, 2015. An independent report on Canada's war against the Islamic State in Iraq and the Levant says the threat posed by extremists is real, but perhaps exaggerated, while the Harper government ignores other important political concerns. THE CANADIAN PRESS/Sean Kilpatrick

OTTAWA - An independent report on Canada's war against the Islamic State of Iraq and the Levant says the extremist threat is real, but perhaps exaggerated, while the Harper government ignores other important political concerns.

An analysis by the Canadian Defence and Foreign Affairs Institute released Monday says the violence being meted out by extremists is just the latest expression of Sunni alienation in Iraq and is rooted in a philosophy to which few Canadians can relate.

"The threat to homeland security, first, is real, but it should not be overstated," said Thomas Juneau, an assistant professor at the Graduate School of Public and International Affairs at the University of Ottawa.

"According to the government, a few dozen Canadians have travelled to Iraq or Syria to fight or train with (the Islamic State) and other extremist groups. Some of them have been or will be killed, while a majority will return home without ill intentions. This leaves a handful who could attempt attacks."

Canada's endorsement of airstrikes and the training of local security forces will not be enough to defeat the Islamic State, and a more long-term vision needs to be developed, he added.

"Ottawa has not clearly articulated its views on a long-term strategy to defeat (Islamic State), though officials have made a number of statements suggesting that Canada broadly endorses the U.S. strategy," the report said.

"Canada has endorsed the premise that airstrikes will not be sufficient to defeat (Islamic State), but are necessary as a first and critical phase to stop its expansion and weaken it."

The Harper government has not been clear about its policy towards reconciliation of the Shiite and Sunni Muslim sects in Iraq and has little influence in Baghdad without an embassy there, Juneau wrote.

"Ottawa has certainly issued statements in this direction" towards reconciliation, said the report. "Yet its actions — notably its diplomatic absence from Baghdad and its relative disengagement from Syria, where it does not recognize the opposition — suggest a certain passivity towards the critical importance of achieving long-term political solutions, despite its rhetorical support."

A spokeswoman for Foreign Affairs Minister Rob Nicholson said the report also noted that the combat mission is in Canada's national interest and critics "often miss the mark."

"As a result of ISIS's threats against Canada and Canadians, we have worked closely with our allies to help degrade and disrupt ISIS's ability to inflict harm," said Johanna Quinney.

"While we have seen some success, as the report notes the threat remains. This is why we have expanded and extended our mission, because it is the right thing to do."

The report comes just over a week after Prime Minister Stephen Harper made a whirlwind visit to Iraq, where he met Prime Minister Haider al-Abadi and delivered $167 million in humanitarian aid, stabilization funds and military equipment.

There are funds for building resilience in communities and $1.2 million for investigating war crimes, but a substantial portion of the cash is for bricks and mortar and clearing away mines.

The analysis warned of the perils of ignoring the root cause of the conflict, and how it could lead to the emergence of a new and potentially more threatening brand of Sunni extremism.

"In the absence of a viable political process in both Iraq and Syria, the collapse of (Islamic State) would most likely lead to the emergence of a new expression of widespread Sunni alienation," the report warned. "Sunni alienation would inevitably see a resurgence under another form, possibly a more threatening one. To avoid this, a political solution is necessary."

Juneau conceded much of the overall war strategy is being guided by Washington, but noted the coalition's full-throated support of the Kurds could backfire over the long term.

"Canada and its allies want to see the emergence of a stable Iraq, yet a key pillar of their approach is to boost the military capabilities of the Kurdistan regional government, an autonomous sub-state actor," he wrote.

"As a result, the second pillar of the strategy may bring short-term gains but at the longer-term cost of making the unity of Iraq more challenging."