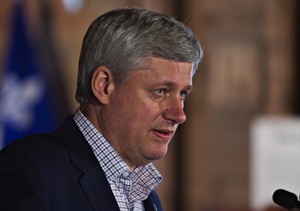 Prime Minister Stephen Harper makes an announcement in Grosse-Ile, Que., Friday May 22, 2015. The federal government says it will invest $30 million over three years in the country's tourism sector in order to attract more Americans north of the border. THE CANADIAN PRESS/Clement Allard

GROSSE-ILE, Que. - Prime Minister Stephen Harper reiterated Friday he will not take part in a national English debate that would be broadcast by the major TV networks.

During a visit Friday to Grosse-Ile, Que., Harper was asked at least twice why he would not participate in the multi-platformed debate being set up by the consortium.

"The position of the party has been clear on this question for some time," Harper responded. "The Conservative party is ready to participate in a maximum of five debates in total, which is a record for federal campaigns in our country."

"From our perspective the slots have been filled with respect to the English debates," Teneycke said in an email.

The possibility remains, however, the party could say yes to just the French-language consortium debate

As of Thursday, the Conservatives were already on board for four debates being organized by three news organizations and a Toronto-based private foreign policy group.

The NDP, Liberals and Green party reached an agreement in principle Thursday with the television consortium that has traditionally organized the election debates. It provides for two national broadcasts with simultaneous translation.