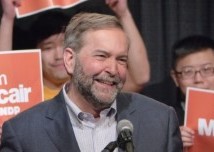 NDP continue to show momentum in the Nanos weekly tracking. The Nanos Party Power Index shows comparable scores for all three of the major political parties with the NDP at 53.4 points out of a possible 100, the Conservatives and Liberals each with 52.8 points. The Green Party registered 32.5 points out of 100 and the BQ 27.1 points (QC only). This week the NDP has hit a high on all measures – the overall index, accessible voters and preferred PM although Mulcair still trails both Harper and Trudeau on this measure.

Nanos periodically releases its four week rolling average of ballot numbers. The latest ballot tracking has the Conservatives at 32 percent, NDP at 30 per cent, the Liberals at 29 per cent, and the Green Party at five per cent.

It doesn’t get much tighter than this.

The Nanos Party Power Index comprises a basket of political goods that includes ballot preferences, accessible voters, preferred PM views and evaluations of the leaders. It is modeled similar to a standard confidence index. It is a random telephone survey conducted with live agents, reaching out to Canadians through a land- and cell-line dual frame sample.

Of note, although the parties had comparable index scores, the scores on the preferred Prime Minister weekly measure were not as tight between the three leaders but Mulcair is trending up. Asked which federal party leader they preferred as Prime Minister, 29 per cent said Harper was their first choice, with Trudeau at 27 per cent, Mulcair at 22 per cent, May at four per cent while 16 per cent were unsure.