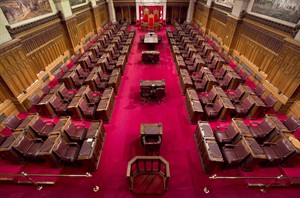 Finding temporary offices for the Senate could cost taxpayers a whopping $24.5 million — even more than the latest big-ticket audit of expenses in the upper chamber. The Senate chamber on Parliament Hill is seen May 28, 2013. THE CANADIAN PRESS/Adrian Wyld

OTTAWA - Finding temporary offices for the Senate could cost taxpayers an extra $24.5 million — even more than the latest big-ticket audit of expenses in the upper chamber.

And it's all because of one city block.

The cost of temporary Senate offices in downtown Ottawa could surpass the $23.6-million audit by nearly a million dollars if the Senate doesn't agree to extend its search boundaries by a single block, an internal government document shows.

Sticking with the current boundaries means Public Works would face a much costlier tender process, rather than being able to negotiate directly with a landlord.

The result would cost taxpayers $24.5 million more over 13 years than the government wants to spend.

The details are contained in a Jan. 30 briefing note to Public Works Minister Diane Finley, obtained by The Canadian Press through the Access to Information Act.

Public Works won't say how much it's willing to spend.

The Senate needs to find space soon so it can be ready for 2018 when the Centre Block is closed for badly needed renovations, displacing both the Senate and the House of Commons for almost a decade.

There are some 27 Senate offices currently without a new temporary home. They also need room for services like mail and security.

Public Works had space in hand: in 2012, the National Capital Commission was ready to give the Senate 10,000 square metres of space — a little more than one-and-a-half CFL fields, not including end zones — in a downtown building where several Senate offices already exist.

That fell through, however, when the Senate decided it needed less than half as much space. Without a business case to support giving up prime real estate near Parliament Hill, the commission backed out of the deal.

The Senate wants to look no further south than the Sparks Street pedestrian mall that is one block away from Parliament Hill and home to multiple government office buildings.

Public Works wants the Senate to look one more block south to Queen Street, which is also home to office buildings that house federal workers.

That extra block would still meet the Senate's requirement that its offices be within a 10-minute walk of its temporary chamber — the government conference centre near the northernmost end of the Rideau Canal.

The January briefing note also includes a letter from Finley to top senators asking them to agree to the expanded search area by March "at the latest" to seek out space and have the offices ready for the 2018 closure.

Senate spokeswoman Nancy Durning said the Senate hasn't agreed to extend the search area for office space, and is still considering its options.