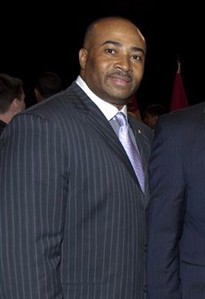 OTTAWA - The battered Senate absorbed yet another body blow Thursday as published allegations that Sen. Don Meredith was having a sexual relationship with a 16-year-old girl were referred to the Senate ethics officer.

Meredith now faces calls for his resignation from senators of both political stripes.

Senate Speaker Leo Housakos said he has referred the matter to the ethics officer, calling the alleged conduct described in a bombshell report in the Toronto Star "incompatible with the position of senator."

In his letter to ethics officer Lyse Ricard, Housakos writes that if the allegations prove true, they would constitute "conduct unbecoming of a senator" that would require "disciplinary sanctions." He alleges Meredith "may have improperly used his position of trust and authority as a senator."

"I find this sort of (alleged) behaviour disturbing, unacceptable and intolerable and I hope that the ethics commissioner will come back in an expeditious fashion," Housakos said in an interview with The Canadian Press.

"As Speaker of the Senate of Canada I'm called upon to explain things. Certain things are inexplicable and this kind of behaviour is inexplicable."

Meredith resigned from the Conservative caucus Wednesday night after the Star reported that a woman claims to have had a sexual relationship with him that began shortly after she turned 16.

The woman told the Star that Meredith initially believed her to be 18, but she told him her true age within six weeks of the pair's first meeting at a Black History Month event at a church in Ottawa.

The Star report said the woman, who is now 18, had sexually explicit online chats with Meredith and that the relationship progressed to kissing and touching before she turned 18.

She said the pair had intercourse twice after she turned 18 before the 50-year-old Meredith broke off the relationship earlier this year.

Sen. Claude Carignan, government leader in the upper chamber, confirmed that he accepted Meredith's resignation Wednesday night, and said he remains deeply concerned by the serious nature of the allegations.

Senators arriving for morning meetings Thursday expressed shock and dismay at the latest scandal to rock their already battered ranks.

Liberal Sen. Jim Munson said the allegations against Meredith are "sickening" and said Meredith "should do the right thing" and resign from the Senate and "get on with his life."

Conservative Sen. Vern White called the allegations "disgusting" and said if they are proven true, Meredith should be expelled from the upper chamber.

The age of consent in Canada for sexual relations is 16, except in cases of a relationship of trust or authority in which the young person is in a dependant or exploitive relationship, when it increases to 18.

According to the Star, Meredith — who was appointed by Prime Minister Stephen Harper in 2010 — has not responded to direct allegations that he had an improper sexual relationship with a person under the age of 18.

At one point, when contacted on the phone, the Star said he told the newspaper he was in a meeting and hung up. Meredith did not immediately respond to calls and messages from The Canadian Press.

He was already the subject of a special review by the upper chamber as a result of a high level of staff turnover in his office.

Meredith has been subject to what the Senate calls a workplace assessment since February. Although there is no formal complaint against him, Senate sources confirmed the review is looking into allegations against Meredith of verbal abuse, bullying and sexual misconduct in the workplace.

Meredith is the fifth Conservative senator to leave the party's caucus in the last 18 months as the upper chamber continues to deal Harper a splitting political headache.

In February 2013, Sen. Patrick Brazeau was kicked out after he was arrested and charged with assault and domestic assault in connection with an altercation in Gatineau, Que. He has pleaded not guilty on all charges.

Sen. Mike Duffy, who is currently standing trial on 31 charges of fraud, breach of trust and bribery, left under a cloud of scandal over housing and travel expenses that persists to this day. He too has pleaded not guilty.

Sen. Pamela Wallin recused herself from caucus shortly after Duffy's departure amid similar controversy over her travel expenses. And Sen. Pierre-Hugues Boisvenu left the caucus earlier this month after the auditor general's conclusions about his expense accounts were referred to the RCMP.

Wallin and Boisvenu have said they believed they did nothing wrong.

Two years prior to being named to the Senate, Meredith ran unsuccessfully for the Conservatives in a 2008 byelection in the riding of Toronto Centre.

His time in the upper chamber has not been without controversy.

In 2012, Meredith landed in trouble with members of his own caucus for appearing at a Persian cultural event at Ottawa City Hall co-organized by the Iranian embassy. The Prime Minister's Office distanced itself from Meredith after the event, saying Meredith wasn't there representing the government, which has taken a hard line against Iran.

Last year, Meredith repaid the Senate for a trip he and his wife took to the National Prayer Breakfast in Washington, D.C. The annual event draws some 3,000 politicians and diplomats, including the U.S. president.

Meredith also landed in hot water for referring to himself as "Dr. Don Meredith" in press releases, despite the fact his doctorate came from a institution that didn't have degree-granting powers.