Arbitration for 19 senators caught up in expense scandal 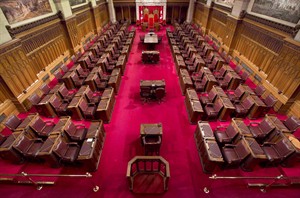 Nineteen senators flagged with problematic expenses by the auditor general have opted to challenge the findings before a special arbitrator. Six of those senators are among a group of nine being referred to the RCMP for a criminal review. The Senate chamber on Parliament Hill is seen May 28, 2013. THE CANADIAN PRESS/Adrian Wyld

OTTAWA - Almost two-thirds of senators flagged with problematic expenses by the auditor general have opted to challenge the findings before a special arbitrator.

Included in that group are six whose paperwork has been referred to the RCMP for a criminal review.

Friday marked the end of a 10-day grace period for the 30 sitting and former senators named by auditor general Michael Ferguson to decide whether to repay their questioned claims, or seek to have them quashed by former Supreme Court justice Ian Binnie.

In all, Binnie will handle 19 cases that are worth about $540,000 combined, according to data posted Friday afternoon to the Senate's website.

So far, those named by Ferguson have repaid almost $126,000 of the nearly $1 million flagged in a critical audit of Senate spending earlier this month. That amount includes about $30,000 in partial repayments from four senators whose files are being sent to the RCMP for review.

The updated figures on Friday showed that retired Liberal senator Vivienne Poy repaid $15,317 for travel claims that included trips for her work as a board member for a charitable organization and taking her staff to Toronto for the launch of a book she co-edited.

Former Speaker Noel Kinsella paid back about $9,400 including a $5,663 tab for a trip he and his wife took to his brother-in-law's funeral.

Much like her colleagues, Johnson said she had done nothing wrong, but wanted to repay the Senate out of concern that the arbitration process will increase the costs to taxpayers.

The auditor general's report cost $23.6 million, and identified almost $1 million in dubious housing, office and travel expenses. Two sitting and seven retired senators have been referred to the RCMP for a criminal investigation, while 21 more flagged with problematic claims could also face a similar probe if the Mounties choose to follow up.

Six of those headed to the RCMP have opted for arbitration, including the two sitting senators caught in this group: former Conservative Pierre-Hugues Boisvenu and Liberal Colin Kenny, who together owe more than $96,000.

Three others referred to the Mounties didn't opt for arbitration or repayment before Friday's deadline: retired Liberal senators Rod Zimmer, whose bill tops $176,000, and Marie-P. Charette-Poulin, whose bill tops $131,000, and retired Conservative Donald Oliver who still owes about $25,000 of the $48,000 flagged by the auditor general.

If the Senate wants to recoup the approximately $325,000 the trio owes, the upper chamber is going to have to take them to court - a path Housakos has previously said the Senate is willing to take.