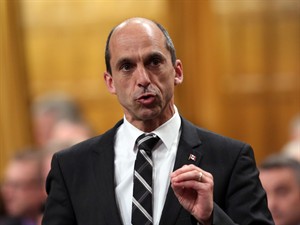 OTTAWA - A Federal Court judge has ordered that Public Safety Minister Steven Blaney and the RCMP commissioner immediately hand over an external hard drive containing a copy of all Quebec gun registry data.

Judge Luc Martineau gave the government until 10 a.m. Tuesday morning to deliver the hard drive to the court — effectively issuing a vote of non-confidence in government assurances that all the remaining long-gun registry records would be preserved while court challenges continue.

It's the first decisive legal skirmish in a battle that could last for some time between information commissioner Suzanne Legault and the Harper government over the long-defunct long-gun registry.

Martineau's order came after a day-long hearing in which Justice department lawyers argued it was unnecessary to produce an actual physical copy of the records because the public safety minister had issued "four separate undertakings" to preserve the data.

Lawyer Richard Dearden, representing Legault, presented affidavits, letters and email evidence showing that previous assurances from the Conservative government in 2012 were ignored as it pushed for the speedy destruction of all gun registry records outside the province of Quebec.

"I don't like using the words, 'Can't be trusted,' but as you heard me say in the court, I don't take comfort in an assurance not to destroy records when there's destruction plans ongoing at the same time — and in fact destruction did occur," Dearden said outside the hearing room.

It was the destruction of disputed records in 2012 that led Legault to issue a report this spring accusing the Mounties of breaking the Access to Information Act. The Ontario Provincial Police are now investigating the allegation.

The Harper government responded by retroactively rewriting the law, granting amnesty to anyone involved in the document destruction, backdating the changes to 2011 and then inserting the provisions in this spring's 167-page budget bill.

"The will of Parliament has been clear on multiple occasions; all copies of the registry are to be destroyed," Blaney's spokesman Jeremy Laurin said in an email. "We will continue to stand up for this position in court."

Legault has called the retroactive move in the face of an alleged crime a "perilous precedent" that could be used to retroactively absolve and cover up electoral fraud, expense scandals or other serious crimes.

Martineau sparked dismayed and alarmed glances Monday among three government lawyers when he mused aloud in court about retroactively absolving Nazis of war crimes and backdating the law to 1940.

Government lawyer Gregory Tzemenakis dodged a direct question from Martineau over whether the government would respect an order to preserve the data once Bill C-59, which provides immunity from prosecution, came into force.

Tzemenakis asserted that "absent a constitutional challenge," the bill's new provisions will be the law.

In response to a question from Martineau, Tzemenakis said there's no transitional measure in the new bill to preserve the previously existing rights of Bill Clennett, the original requester of the gun registry data.

"Parliament can divest individuals of rights, as long as it doesn't infringe the charter," said the government lawyer.

Clennett, most famous for being throttled by former prime minister Jean Chretien during a 1996 demonstration that coined the term "Shawinigan handshake," issued a long manifesto on the need for governments to obey the law before Monday's hearing.

He was sporting a grin as he departed the court at day's end.

"It's a good first step, for sure," Clennett said.