With Mulcair’s fortunes on the rise, skeletons hauled back out of the closet 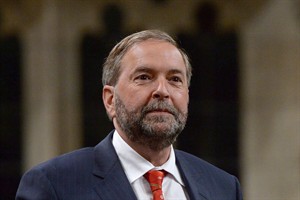 NDP Leader Tom Mulcair asks a question during question period in the House of Commons on Parliament Hill in Ottawa on June 15, 2015. A report published online by Maclean's magazine says NDP Leader Thomas Mulcair was in discussions in 2007 to join the Conservative party as a senior adviser on the environment to Prime Minister Stephen Harper. THE CANADIAN PRESS/Sean Kilpatrick

OTTAWA - It might be old news that Tom Mulcair once talked to Stephen Harper's Conservatives about becoming an adviser, but the reasons behind why the story has resurfaced could be the most interesting part.

Stories have sprung up every few years about Mulcair having entertained the idea in 2007 of becoming an environmental adviser to Prime Minister Stephen Harper.

This week, Maclean's magazine wrote their own version of the story, saying that the talks collapsed because Mulcair wanted a $300,000 salary— a previous account had the amount pegged at $150,000.

Then, as now, Mulcair has said that the reason he walked away was because of the Conservative position on the Kyoto climate change accord. He said he was invited to consider the proposal by his "old friend" Lawrence Cannon, a Quebec Liberal (like Mulcair) who was in the Harper cabinet.

In 2008, Mulcair ran successfully for the NDP in a federal byelection in the Montreal riding of Outremont.

"In 2007, I spoke very publicly about this issue. And in 2011, I spoke about it," Mulcair said. "It's been in the media for years. There are some who are trying to put that back out into the media, I'll let you ask them about it."

Now, as was the case three years ago, the story of Mulcair's flirtation with the Conservatives seems to come up just as he's beginning to pose a political threat.

In 2012, Mulcair was running for the leadership of the NDP when a batch of articles came out. At the same time, a group of "progressive" New Democrats created a website called "Know Mulcair."

"We are worried that many New Democrats are considering supporting Thomas Mulcair without knowledge of the political positions he's taken in the past," read the website.

Fast forward to 2015, and Mulcair is the leader of a party that is rising in the polls. For the first time, there is active discussion about the potential for the party to form government.

For the Conservatives, and more importantly for the Liberals, hauling any and all of Mulcair's skeletons out of the closet could be a priority — especially the kind of skeletons that call his level of conviction into question.

"I'm going to let Mr. Mulcair explain his own decisions and processes," Liberal Leader Justin Trudeau said Tuesday when asked about the story.

"Back in 2007, there were no illusions about Mr. Harper's views on the environment, or on a wide range of issues, and I can certainly assure everyone that I would not have considered joining the Prime Minister's Office at that time or at any time."

Ian Capstick, a former aide to Mulcair's predecessor Jack Layton, said with the election approaching, each of the parties will be digging up dirt and dusting off older controversies to lay in front of the public.

"It's classic war-room politics — it's kind of how these political operatives thrive," said Capstick, managing partner of the Ottawa firm MediaStyle.

"They take a little bit of something and make something out of it, and that noise and distraction pushes the opponent off their message of the day."