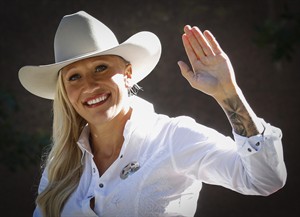 CALGARY - Two-time Olympic bobsled champion Kaillie Humphries sported a gold-medal smile Friday as she presided over the kickoff to the Calgary Stampede.

An estimated 250,000 people took the morning off work, donned cowboy hats, boots and jeans, and lined up early for the parade, which marks the beginning of a 10-day celebration of the cowboy way of life.

"I'm super excited. This is honestly a dream come true, so I'm speechless. I really don't know what to say except it's going to be an amazing time," said Humphries, sitting on a horse named Que.

Humphries won the two-woman event at the 2010 Winter Games in Vancouver and then successfully defended her title in 2014 in Sochi. Last November, she piloted a mixed-gender team to the bronze medal in the Canadian four-man bobsled championships.

Serving as parade marshal was clearly a highlight.

"This I prize very highly among the rest of all the other major accomplishments,'' she said.

"It made my day and my year so much better. I don't honestly think anything can top this.''

Andrea Daye arrived at 5 a.m. with a fleece blanket and coffee to stake out a prime spot along the route.

"I think the excitement of the parade is really something that can't be missed. I like to get down here and get a good spot so my kids can watch it," she said, adding her sons are most excited about the cowboys and the tanks.

Walter Klingele nabbed his spot about a half-hour later. He said he was looking forward to seeing Humpries head up the parade.

"She did a great job and I'm glad she's doing the front today."

"He was in the car. I wish he was on a horse. I would have seen him better on a horse."

Rachel Notley, who was elected as Alberta's premier in May, was taking part in her first parade.

"This time last year, when I was here at the Stampede campaigning for the leadership of the NDP, I will say I did not plan to be (in the) parade on a horse the following year. It's very exciting. I feel very privileged," she said.

"I have ridden on a horse, although not for about 40 years."

Calgary Mayor Naheed Nenshi said he doesn't expect a downturn in the energy sector to dampen the party mood.

"Will people spend quite as much money? Maybe not, but there's a quarter million people out there and they seem like it's time to celebrate."