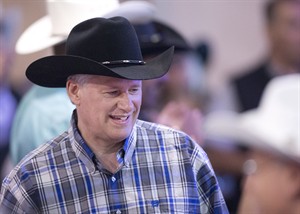 NDP Leader Tom Mulcair is now there too.

The prime minister launched a blistering attack on his two main competitors in a speech to party faithful at his annual Calgary Stampede barbecue on Saturday in advance of this fall's federal election.

Harper used much of his speech to outline his government's response to national security, saying Canada was "brutally reminded" last October it is not immune to the threat of "jihadist terrorism."

He continued to refer to Mulcair and Trudeau simply as the "other guys" who he said refuse to acknowledge that Canadians are at risk and wouldn't have been willing to provide the necessary leadership to send Canadian troops to take part in the international battle against terrorism.

"And, of course, both Mr. Mulcair and Mr. Trudeau have opposed the military mission, said they would withdraw our forces and our aircraft, in Justin Trudeau's case saying so, as you will remember, in terms laced with contempt for the Canadian military," Harper added.

"Friends, these guys just don't get it. We're living in a dangerous world."

Harper also chastised Trudeau for confirming he would take Canada out of the international coalition in the battle against the Islamic State and make strong diplomatic relations with Iran a priority.

The prime minister said the economic policies of both the Liberals and NDP are "remarkably similar" and neither leader appears to have even a working knowledge of budgeting and how job creation works.

"Friends, here is the bottom line: the Liberals and the NDP voted against every single tax break and every single family benefit we brought in. And their economic policies are remarkably similar," Harper said.

"They will tax away, in whole or large part, the universal child care benefit, income splitting, and tax-free savings accounts.

"Friends, we've come too far to take risks with reckless policies. That's why I'm confident that this October Canadians will choose security over risk."

Harper's speech was a marked departure from last year where he focused almost exclusively on Trudeau and made scant mention of Mulcair and the NDP.

Mulcair, who has surged in the polls in recent weeks, told reporters on Friday that increased success usually does lead to negative attention.

"I guess it's the ultimate compliment in politics and it shows that you do have the status where you become the target but you know what? You take it in stride and it's par for the course," Mulcair said.