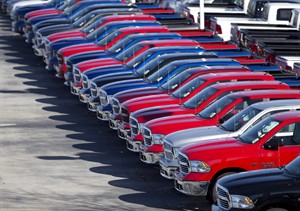 TORONTO - A U.S. order requiring Fiat Chrysler to buy back thousands of Dodge Ram pickups and Chrysler SUVs does not apply to Canada, a discrepancy that highlights a weakness in consumer protection here, national advocacy groups say.

The US$105 million fine and buyback program for up to a third of 579,000 vehicles was imposed on Fiat Chrysler by the U.S. government on Monday.

The National Highway Traffic Safety Administration punished the company after an investigation into nearly two dozen recalls found it botched its response by not doing enough to notify customers and get the affected vehicles off the road and repaired.

Ken Whitehurst, the executive director for Consumers Council of Canada, said Canadians often assume consumer protections are stronger here than in the more business-friendly U.S. in many areas, including vehicle safety, but the opposite is true.

"Transport Canada doesn't have the powers to act forcefully the way we see in the United States," he said.

"Canada depends quite a lot on companies for reciprocal action when it comes to recalls."

Whitehurst said in the past, Canadian companies have mostly played by the rules and maintained a culture of responsibility, but the multinational corporations that play an increasingly important role in the Canadian economy are indifferent.

Transport Canada, unlike its American counterpart, has limited authority to force automakers to address safety issues and impose punishments. It only received the power to compel companies to notify Canadians about safety problems with their vehicles in May.

Previously, Transport Canada could not notify Canadians of safety problems without the co-operation of automakers.

Bruce Cran, president of the Consumers' Association of Canada, said while the automotive safety laws were updated this year, the federal government needs to do far more to empower Canada's consumer protection and safety agencies.

"Successive governments have neglected consumers in this regard," he said. "As a nation, I think we're being left behind."

Transport Canada spokeswoman Linda Licari confirmed in an email that the department does not have the power to compel a buyback like the one in the U.S.

She said Transport Canada requires periodic updates from companies once a recall has been announced, but it does not have the power to set a deadline for fixing a safety issue.

She said a bill called the Safer Vehicles for Canadians Act would give the department the authority to add deadlines for recalls and fix many of the other gaps in its powers. But it was introduced in early June and was not passed before the legislative session ended.

On Wednesday, law firm Merchant Law Group filed a motion to authorize a class-action lawsuit in Montreal against Fiat Chrysler over its vehicle recalls.

The class-action seeks compensation for owners of the cars included in the recalls for which the company was punished by the U.S.

LouAnn Gosselin, a spokeswoman for Fiat Chrysler Canada, said the company had yet to be served with the lawsuit and therefore could not comment.