Ontario Liberals accuse Harper of abandoning workers in the province 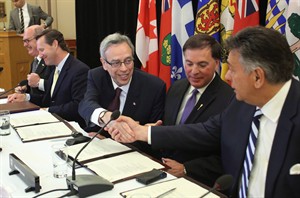 Ottawa has warned the province it will not make any legislative changes to treat the proposed Ontario Retirement Pension Plan like the Canada Pension Plan, and would provide no federal help to collect contributions or administer the scheme.

"This is a cynical, partisan stunt, executed on the eve of a federal election campaign," said Ontario Finance Minister Charles Sousa. "He's slapping the face of Ontarians by taking the actions that he's doing today, and that's uncalled for."

Two-thirds of Ontario workers do not have a workplace pension, and Harper knows that CPP payments averaging $6,900 a year will not provide adequate retirement income, added Sousa. However, Harper will get a pension of $191,000 a year when he leaves office, he said.

"What he's telling you is fend for yourself, but not him," said Sousa. "He's going to have a gold-plated pension plan that's going to provide tremendous benefit for future years for himself, but he's denying that very right to the people of Ontario."

"We are committed to doing everything possible to stop the massive Trudeau-Wynne payroll tax hike on middle-class families," said Poilievre. "We will not help Justin Trudeau and Kathleen Wynne implement their dangerous scheme to take money from workers and their families, kill jobs, and damage the economy."

The federal government already has a co-operative agreement with the Quebec Pension Plan and it made legislative changes to the Income Tax Act in 2010 to allow higher contributions to the Saskatchewan Pension Plan, noted Sousa.

The Harper government's refusal to co-operate with the proposed pension plan is "a slap" to Ontario, Sousa said.

Ontario's new pension plan would require contributions of up to $1,643 from employers and workers in any company that does not have a workplace pension, but exactly who will have to participate is still being worked out. It will be phased in starting in 2017 with larger companies before moving to smaller businesses like corner stores.

The Ontario Chamber of Commerce and the Canadian Federation of Independent Businesses have both warned the provincial pension plan could force employers to eliminate positions to cope with the added costs.

"Moving forward with this reckless payroll tax may be music to the ears of government unions, but does nothing to instill confidence among the province's business owners," said the CFIB's Nicole Troster.

Sousa admitted Ontario would face greater costs to set up and administer its pension plan if it can't get help from the Canada Revenue Agency, but insisted the province will go it alone if there is no change in federal government after Oct. 19. The province would prefer to enhance the CPP rather than implement its own plan, but the Conservatives oppose any increases to CPP deductions.