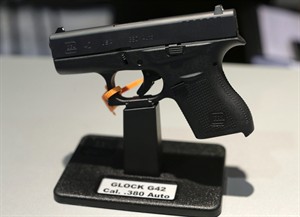 A Glock G42, .380 caliber auto hand gun sits on display at the Glock display booth during the Shooting Hunting and Outdoor Trade Show, Tuesday, Jan. 14, 2014, in Las Vegas. The federal government is delaying implementation of regulations intended to help police trace crime guns - the seventh time it has put off the measures. THE CANADIAN PRESS/AP, Julie Jacobson

OTTAWA - The federal government is delaying implementation of regulations intended to help police trace crime guns — the seventh time it has put off the measures.

Just days before the federal election call, the government quietly published a notice deferring the firearm marking regulations until June 1, 2017.

The measures would require specific, identifiable markings be stamped on firearms. They had been slated to take effect Dec. 1 of this year.

The July 29 notice from Public Safety Canada says the delay will allow the government to continue consultations "with a broad range of stakeholders" — despite six previous delays in enacting the regulations, first drafted in 2004.

Public Safety spokeswoman Zarah Malik did not make anyone available for an interview about the latest delay.

The regulations would require domestically manufactured firearms to bear the name of the manufacturer, serial number and "Canada" or "CA." Imported guns would have to carry the "Canada" or "CA" designation along with the last two digits of the year of import.

The measures would help Canada meet the requirements of the United Nations Firearms Protocol and a convention of the Organization of American States.

There is support among police for the marking scheme to expedite investigations into gun crimes and detect firearms trafficking, smuggling and stockpiling, the Public Safety notice says. The import markings can also help law enforcement determine whether to focus on a smuggling operation.

Some firearms advocates have argued the obligation to mark imported guns would mean acquiring marking technology or making arrangements for another company to apply markings, with an estimated cost of $200 per gun, the notice says.

However, an independent study commissioned by the government said the cost to stamp or engrave markings for Canadian manufacturers and large importers would range from nothing at all to $25 per firearm. It was not possible to gauge the impact on individuals and small importers.

During the latest deferral period, the Canadian Firearms Advisory Committee — appointed by the public safety minister to provide advice — expressed support for "having fewer marking requirements" in the planned regulations.

The Coalition for Gun Control says marking is an essential tool for enforcement, helping states in their efforts to trace weapon flows and preventing the diversion of legal guns to the illegal market.

"Given the problems with smuggled guns internationally and on the streets of Canadian cities it is, of course, disappointing that the Canadian government has once again delayed implementing this critical set of measures," said coalition president Wendy Cukier.

The notion that markings help police solve crime amounts to "a rather unsubstantiated, blanket statement," said National Firearms Association spokesman Blair Hagen, who expressed disappointment with the federal delay because he would rather see the plan killed outright.

"We've been advising them to completely dispense with this," he said. "Because there's absolutely no rational argument for imposing these type of regulations on the Canadian firearms industry. It will put a lot of businesses out of business."

The department's notice acknowledges that the usefulness of the marking scheme is "diminished" by the Conservative government's move to eliminate the long-gun registry, as it is helpful to be able to link the most recent legal owner to firearm markings.

Still, Public Safety hasn't dropped the plan entirely. The notice says the delay until mid-2017 could allow the government to seek the views of industry, police, victims' groups and the international tracing centres of Interpol and the U.S. Bureau of Alcohol, Tobacco, Firearms and Explosives.

"During the deferral period, a marking scheme could be determined that will enable law enforcement to trace crime guns and permit Canada to assist international investigations, without imposing unnecessary burdens on firearms businesses."