Mohamed Fahmy, 2 other Al-Jazeera journalists sentenced to 3 years in prison 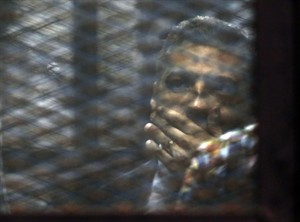 In his ruling Judge Hassan Farid said he sentenced the men to prison because they had not registered with the country's journalist syndicate. He also said the men brought in equipment without security officials' approval, had broadcast "false news" on Al-Jazeera and used a hotel as a broadcasting point without permission.

Immediately after the ruling, Fahmy's wife, Marwa, wept in the court.

"I'm extremely sad, and I'm extremely disappointed from this verdict, it is so unfair," she told The Canadian Press.

"This sentence has shown that it's a political case and they just want to get Al Jazeera," she said, adding "All I'm asking now is for justice and fairness — the same for what applied for Peter."

She was referring to Peter Greste, her husband's Al Jazeera colleague who was deported to his native Australia in February.

Lynne Yelich, minister of state for foreign affairs, said in a statement that Canada is "disappointed" and called on the Egyptian government to do everything possible to allow Fahmy to return to Canada. Prime Minister Stephen Harper tweeted similar sentiments.

The US government also issued a statement expressing disappointment over the verdict saying it "undermines the very freedom of expression necessary for stability and development" in Egypt.

It wasn't immediately clear how the sentence would affect Fahmy and his co-convicted. Greste, however, spoke to Al-Jazeera from Sydney and said he believed an Egyptian appeals court would overturn the verdict.

"It sends a message that journalists can be locked up for simply doing their job, for telling the truth and reporting the news. And it sends a dangerous message that there are judges in Egypt who will allow their courts to become instruments of political repression and propaganda," she said.

A slew of others condemned the conviction including the federal Liberals and New Democrats, Amnesty International and Canadian Journalists for Free Expression.

Both the Liberals and NDP called for Harper to contact Egypt's president directly and take up Fahmy's cause.

The 41-year-old Fahmy's troubles began in December 2013 when he was working as the Cairo bureau chief for Qatar-based satellite news broadcaster Al Jazeera English.

He, Greste and Egyptian producer Baher Mohammed were abruptly arrested and charged with a slew of offences, including supporting the Islamist Muslim Brotherhood, a banned organization affiliated with ousted Egyptian president Mohamed Morsi, and with fabricating footage to undermine the country's national security.

The trio maintained their innocence throughout, saying they were just doing their jobs, but after a trial which was internationally decried as a sham, they were found guilty and sentenced to prison terms.

Greste was suddenly allowed to leave Egypt before their retrial began, under a law which allows for the deportation of foreign nationals convicted of crimes.

Fahmy gave up his dual Egyptian citizenship while behind bars in the hopes that he could follow the same path, but that didn't happen. He was, however, granted bail in February shortly after his second trial got underway.

Angered by Al-Jazeera's handling of the case, Fahmy has filed a lawsuit in Canada seeking $100 million from the broadcaster, saying that it put the story ahead of employee safety and used its Arabic-language channels to advocate for the Brotherhood. Al-Jazeera has said Fahmy should seek compensation from Egypt.

Fahmy moved to Canada with his family in 1991, living in Montreal and Vancouver for years before eventually moving abroad for work, which included covering stories for the New York Times and CNN.

With files from The Associated Press