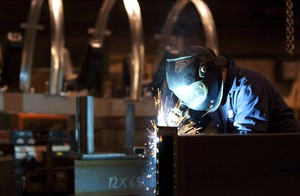 But the data suggests the recessionary dip could, perhaps, already be something of the past.

The federal agency said real gross domestic product contracted at an annual pace of 0.5 per cent in the April-June quarter, which followed a revised decline of 0.8 per cent in the first three months of 2015 from its original estimate of a 0.6 per cent drop.

However, there were positives tucked in the highly anticipated figures that almost immediately echoed on the campaign trail.

The second-quarter drop was only half as steep as a consensus of economists had predicted and there was evidence that the decline had finally bottomed out.

Canada's GDP climbed in the month of June by 0.5 per cent after shrinking over the first five months. The last time the economy experienced a one-month gain of at least 0.5 per cent was July 2013 when it grew by 0.63 per cent.

That June increase was led by a 3.1 per cent boost in natural resources extraction — the category's first gain following seven consecutive months of decline.

"There's nothing to cheer about in the Canadian GDP numbers, but there's no reason for any more booing than we've already had," CIBC chief economist Avery Shenfeld said Tuesday.

"The economy is contracting through the first half of the year, but the solid gain in June suggests that we'll at least get a breather with a return to growth in the third quarter."

The new batch of data added fuel to the heated, ongoing political debate over how best to respond to the weakened economy as parties battle for support ahead of the Oct. 19 federal election.

On Tuesday, Prime Minister Stephen Harper, whose Conservative party has pinned its re-election hopes on its economic record, tried to highlight the positives in the new data.

"The Canadian economy as a whole is now growing, according to the June figures," Harper told reporters.

"That is the reality of the situation — it is good news."

He also reiterated his stay-the-course mantra, insisting the country must ride out external economic and market turbulence whipped up in places like China.

The Tory leader has frequently cited forecasts that predict the economy will rebound in the second half of the year, including a projection by the Bank of Canada.

The central bank, however, has downgraded its growth forecast for 2015 and cut its trendsetting interest rate twice this year to cushion the blow of low crude prices.

The hobbled economy has so far shaped up to be the primary issue of the campaign — and Harper's opponents have used his record as a bull's-eye for their attacks.

The last time the economy contracted over two consecutive quarters was in 2009 during the Great Recession, when GDP pulled back by 8.7 per cent in the first quarter and 3.6 per cent in the second.

Drilling deeper into the second-quarter data, the numbers showed the decline in the economy reached beyond natural resources extraction, which contracted by 4.5 per cent.

Business investment in machinery and equipment dropped 4.6 per cent while non-residential structures fell 2.3 per cent, the third straight quarterly decline.

On the growth side, a considerable amount of the gain in the quarter came from household consumption — rising by 0.6 per cent — at a time when interest rates remained low. As a result, the household savings rate declined.

Exports also crept up in the second quarter by 0.1 per cent after contracting for two consecutive quarters.

Meanwhile, positives in the June data suggest the expected turnaround forecasters have been banking on could be underway.

On a monthly basis, Statistics Canada said wholesale trade rose by one per cent in June after a 1.1-per-cent decrease in May and a 1.6-per-cent in April.

Manufacturing output rose by 0.4 per cent after contracting by 1.6 per cent in May.

The finance and insurance sector grew by 0.7 per cent in June and the arts and entertainment industry rose by 6.4 per cent, thanks in large part to Canada's role as host of the FIFA Women's World Cup.

"While a technical recession was confirmed, its amplitude is relatively mild and there is every suggestion that it has already ended," Jimmy Jean, an economist with Desjardins Capital Markets wrote in a note to clients.

Shenfeld said, however, while the early signposts are positive, the further retreat in oil prices recently could lead to continued pullback in capital spending in the energy sector.

"It's not like we're out of the woods yet," Shenfeld said.

The quarterly reading Tuesday is also expected to intensify the economic debate over the term technical recession.

Harper has side-stepped campaign-trail questions about whether Canada was in recession this year. He also declined to define a recession when asked about it earlier this week, saying he thought it was more important to "describe the reality of the situation rather than to have labels."

Shenfeld said it's one thing to call it a "technical" recession, but he noted that any recession he's ever seen in historical data has also had a decline in employment.

"We haven't yet seen a net decline in employment that would characterize every recession that Canada has ever had," he said.