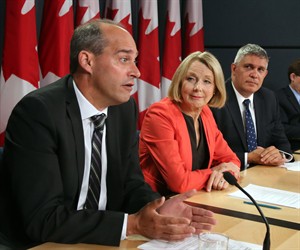 OTTAWA - It was either a few weak months or a lost decade.

That distinction was carved into the federal election campaign trail on Tuesday after Statistics Canada reported the economy met the technical definition of a recession at the end of June.

The agency said the economy contracted at an annual pace of 0.5 per cent in the second quarter of 2015 — a second straight quarter of contraction — and it laid down a key marker for the leaders of the three main federal parties.

"We've had a few weak months," shrugged Stephen Harper, who immediately dove into one of the silver linings in the report. The agency found that the economy began to bounce back in June as GDP grew by 0.5 per cent after shrinking over five straight months.

"Elsewhere there's growth and today one of the greatest monthly growths occurred in June, so it's clear that the Canadian economy is growing," the prime minister said in Burlington, Ont. where he pledged new support for Canadian manufacturers hit hard by the downturn.

Added Andrew Thomson, a former Saskatchewan finance minister the NDP is touting as a star candidate: "Under Stephen Harper, this has been Canada's lost decade."

Liberal Leader Justin Trudeau allowed that the size of the recession might be marginal. But he said the bigger picture is that Canadians are struggling in an economy hampered by low growth.

Trudeau said Canadians have been living with the reality of a weak economy for months now and don't need official numbers to confirm what they already know.

"What they would have needed is that politicians, rather than getting hung up on definitions, invest in their future and in their jobs," Trudeau said in Gatineau, Que.

One of Trudeau's top economic team members, his trade critic Chrystia Freeland, didn't mince words: "It's crystal clear, there's no debate. We've had two consecutive quarters of shrinking GDP. That's a recession. We don't know yet if it will be a shallow recession, but we are in recession."

Economists were far less equivocal. Some saw the depth of the recession as relatively mild, while others warned of a rough road ahead if the price of oil continues to drop.

Harper has largely blamed international factors beyond Canada's control for the downturn, particularly the economic slowdown in China.

He said the Conservative plan of a balanced budget, low taxes and affordable investments was the best course for the country in the face of greater global problems.

"If we change plans, we'll have a permanent recession like is occurring in many other countries. We're on the right track," the prime minister said.

There is "some validity" to Harper's argument that there are international events beyond Canada's control, said Gordon Betcherman, a political economics expert at the University of Ottawa's School of International Development and Global Studies.

"I wouldn't consider it a deep, economic event."

But he said the emphasis Canada has placed on resources and commodities make it vulnerable to global turbulence and raise legitimate questions about the broad economic strategy of successive governments.

David Wolfe, a University of Toronto expert in politics and economics, said that while this is a mild recession, it raises questions about whether a government should be focusing on balancing budgets or expanding investments in infrastructure.

"The challenge with that is timing," said Wolfe.

"Sometimes, the recession is already over before the spending can get out the door. But it does make a case for relaxing the current emphasis on balanced budgets."

On that point, the gap between Trudeau and Harper remained wide on Tuesday.

Trudeau reiterated his platform plank — which distinguishes the Liberals from the Conservatives and the NDP — to run deficits before balancing the budget in 2019 in order to spur growth by investing in infrastructure.

"That's why our plan will invest in real growth and isn't really dependent on this morning's announcement."

Harper said he saw enough in Tuesday's numbers to justify his stay-the-course approach.

Harper acknowledged that there "have been challenges, particularly in the energy and some commodity sectors because of falling prices," but there are signs of recovery.

"And thank God we didn't use a couple of months of weak data to go out and commit this country to three years of deficit spending and huge tax increases like the other guys would have done."